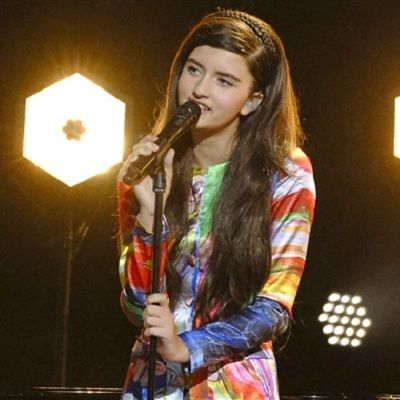 I want to sing for the whole world. Singing is as important as breathing to me.

The rising star is very focused on her future career. She loves music at a whole different level that it means to her same as breathing air.

Jordan is deeply connected with her grandmother, Mery Zamani. She likes to spend her free time with her pet dog, Vanilla. She is very soft-hearted who can’t see anybody suffering.

Who is Angelina Jordan?

Angelina Jorden is a Norwegian Jazz singer. Jordan is the winner of Norway’s Got Talent.

She is also a finalist of America’s Got Talent: The Champions (2020) with the Golden Buzzer by Heidi Klum.

Angelina’s mother is Sara Astar who is the daughter of a Japanese father and Iranian artist Mary Zamani. Her father is of Swedish Origin.

She has a six years younger sister, Juliette.

She is studying in Oslo Waldorf School at the Vestre Holmen area.

She also attended the Oslo School of Music and Performing Art. From the school, she received her vocal training.

As a child, she was helped by her grandma who happens to be an artist by profession. At the age of 5, she asked her mother to sign for Talent contests.

In March 2014, she went for the audition for the show, Norway’s Got Talent. Due to her mesmerizing performance, she won the Talent show. At the time, she was only seven years old.

After her final performance in the show, her performer went viral. In just two years, she had 650 million views on the Internet which turned her into an Internet sensation.

After the show, she started performing for many prestigious shows. Some of them are-

In 2015, she published her first book, Mellom to hjerter that means Between Two Hearts. The book is based on her true incident where she met a motherless Asian girl who promised to pray for her when she gave her shoes.  At the time, the girl was walking in the street barefoot.

America’s Got Talent: The Champions

Recently, Angelina has appeared in America’s Got Talent as a contestant. The 13 years contestant revealed that she has been waiting for 10 years to sing for Simon Cowell.

For the audition of the show, she sang the song her version of Bohemian Rhapsody. Her performance in the show mesmerized everybody present in the hall. Her heartfelt performance deeply moved everybody and all the judges gave her standing ovation.

As an appreciation, she received the Golden Buzzer by Heidi Klum.

She makes $27k US with her second YouTube Channel.