Angelina Pivarnick is a TV personality who is best known for starring in the Jersey Shore.

Angelina Pivarnick is a married woman. She is married to Chris Larangeira. Chris is also a reality TV star.

They married on 20th November 2019 at the Park Chateau Estate & Gardens in East Brunswick, New Jersey.

The two engaged on 12th January 2018 after a year of dating. 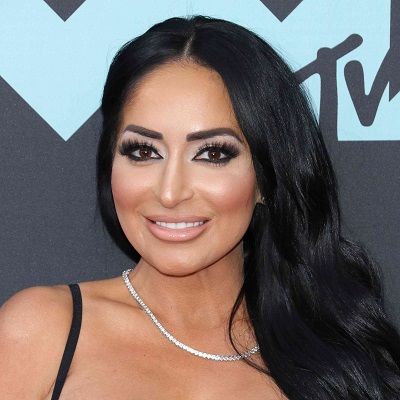 Who is Angelina Pivarnick?

Previously, in 2018, she appeared on the show How Far Is Tattoo Far?

Angelina Marie Larangeira was born on 26th June 1986 in Staten Island, New York City, US. She is the daughter of Mr. Pivarnick and Ann Marie Pivarnick.

She had a difficult childhood as her father was abusive and had a bad relationship with her mother. He had been in and out of jail often.

Similarly, she has a sister, Alyssa.

She is a graduate of Susan E. Wagner High School in Staten Island, New York.

Angelina Pivarnick worked as a waitress, bartender, and dental assistant. After that, she joined the cast of 2009 Jersey Shore which premiered on 4th December.

She was evicted from the Shore House in the third episode of season one after refusing to work her shift at the T-shirt shop.

After that, she was on season two of Jersey Shore in Miami Beach, Florida. After being evicted again she did not return for the third season.

Again, she appeared as a contestant on the reality dating series Excused. Likewise, in 2018, she was on the show How Far Is Tattoo Far?

She released a song, Gotta Go Out in August 2011 under the name Miss AP.

Similarly, in December 2012, she announced a single release, Serendipity to compensate the LGBT community for her behavior.

She has not been part of any notable controversies in her career. Moreover, there are no rumors concerning her life and career.

Angelina Pivarnick is a brunette with brown eyes. She is 5 feet 1 inch tall and has an average weight.

You may also read the age, parents, career, net worth, body measurement, and social media of Lucy Watson, Chris Brown, and Cami Li