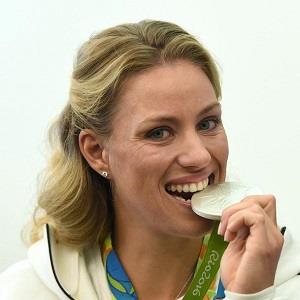 Angelique Kerber has not revealed information relating to her personal life. There are no records of any relationships that she has been involved in throughout her career. At present, she is believed to be single.

Who is Angelique Kerber?

Angelique Kerber is a German professional tennis player and former world No. 1. She has won 11 singles titles across all surfaces on the WTA Tour, including two major titles at 2016 Australian Open and the 2016 US Open.

Additionally, she has also won an Olympic silver medal while representing Germany at the 2016 Summer Olympics.

Kerber was born in Bremen, West Germany on 18, January 1988 to parents Sławomir Kerber and Beata (née Rzeźnik). Additionally, she has one sister, Jessica.

Throughout most of her early life, she grew up in  Kiel and started playing tennis at age three, eventually joining the junior circuit. She became interested in the world of tennis since her childhood years.

She holds both German-Polish citizenship nationality. Furthermore, she belongs to a mixed ethnic background of Polish and German.

Talking about her education, there is no detailed information relating to Kerber’s educational background at present.

Kerber defeated Marina Erakovic in the first round during 2012. At the 2012 Australian Open, Kerber was the 30th seed. Later, she reached the third round and lost to Maria Sharapova. As a result, Kerber rose to her career-high singles ranking of world number 27. In addition, at the 2013 Western & Southern Open, Kerber lost to Li Na in the third round.

She finished 2014 by representing Germany in the Fed Cup final. More recently, at the 2017 Toray Pan Pacific Open, she took revenge on Naomi Osaka and defeated Daria Kasatkina and Karolina Pliskova before falling to Anastasia Pavlyuchenkova.

At the 2018 Australian Open she defeated compatriot Anna-Lena Friedsam and Donna Vekic both in straight sets to advance to the third round where she was due to face former World No. 1 Maria Sharapova. Eventually, she returned to the top 10 in 2018, ranked 9.

Kerber won the WTA Player of the Year in 2016. Previously, she won the German Sportswoman of the Year and US Open Sportsmanship Award. Additionally, she has also won the ITF World Champion Award.

Kerber has not revealed her current salary. However, she has an estimated net worth of around $ 27 million at present.

Kerber became part of a controversy after she received death threats on Facebook. She received threats from gamblers who lost money when she went down in the second set tie-break from 5-1 up. There was a rumor that suggested she might be dating her coach. This, however, still remains a rumor and nothing more.