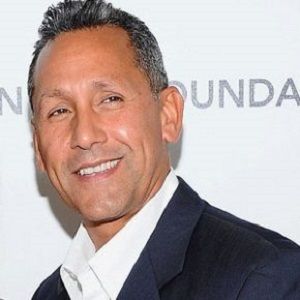 What is the relationship of Angelo Pagan?

Angelo Pagan is a married man since 2003. His wife is Leah Remini, an actress.

The couple met each other in the year 1996 in a restaurant and started dating each other. Pagan announced his engagement to his beautiful girlfriend on December 24, 2002.

After spending several years together, the couple got married on July 19, 2003.

The couple together has a beautiful daughter named Sofia Bella, born in 2004. Angelo is living a happy life with his wife and daughter and there is no sign of divorce.

Talking about past affairs, Angelo has three sons from his previous marriage to a non-celebrity. Their names are three sons including Alex, Nico, and Angelo Pagan Jr.

Who is Angelo Pagan?

Angelo Pagan is an American actor, producer, and entrepreneur. He is famous for his role in the movies Dance with Me (1998) and Swordfish (2001).

In 1989, he was part of the NBC series Midnight Caller. Also, he has been featured in one of the tracks of the C+C Music Factory musical group.

He belongs to a multiracial ethical parental background as his father is of Sicilian descent while his mother is of Austrian-Jewish descent. He was raised in The Bronx, New York City.

Talking about his siblings, he has a brother, Michael, and a sister, Nicole. Moreover, he has four step-sisters, Christine, Stephani, Elizabeth, and Shannon.

He completed his high school education at San Francisco City College. Later, he joined San Francisco State University and he graduated there in 1990.

He was interested in acting since his school days. While he was in college, he got an opportunity to work in a commercial. He moved to California at the age of 22 in order to pursue his career in acting.

Pagan’s career as an actor began with a commercial from his college days. Since then, he started acting in various TV shows in small roles.

He appeared in a dramatic NBC TV series, Midnight Caller in 1989. Since then, he has appeared in several TV shows and TV series.

In 1998, he made his debut in movies with the movie Dance with Me. He also appeared in the 2001 hit movie Swordfish. His performance was appreciated by the audience positively.

He also acted in Almost a Woman (2002). Since he had an interest in singing as well, he released a solo music album titled Don’t Be Afraid.

Later, he was featured on the Television show, Leah Remini: It’s All Relative, along with his beautiful wife Lean Remini. In 2007, he appeared in the movie Sister’s Keeper.

He has a net worth of 5 million dollars but his salary is not revealed yet. His wife Leah’s net worth is around $25 million as of 2022.

Talking about the rumors and controversy, there was a rumor that Pagan has tattooed his daughter’s and wife’s names on his shoulder.

There are no rumors of him being involved in any extramarital affairs at the moment.

Angelo Pagan has a height of 5 feet 10 inches. His body weighs 65kg. He has dark brown eyes and has got a combination of black and white hair.

There is no information about his dress and shoe size.