Anh Do is a Vietnamese-born Australian actor, comedian, author, and artist. He is married.

Anh Do is a married person. He has tied the knot with Suzanne(Suzie) Do and the couple is blessed with four children: Summer, Leon, Xavier, and Luc Do. The family is currently living together and there is no sign of divorce between the couple. 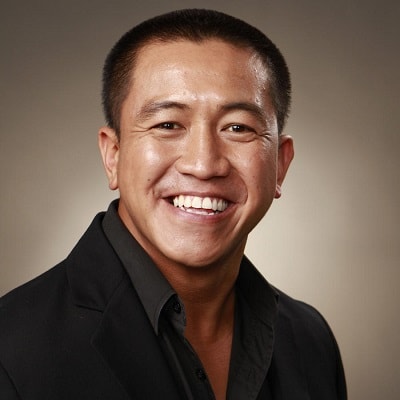 Quick Facts of Anh Do

There's only two times on life, there's now and there's too late

worst happens, if you lose and fail, but you still celebrate coming second because you’ve given it a red hot go. There is no need to fear failure.

Relationship Facts of Anh Do

Who is Anh Do?

Anh Do is a Vietnamese-born Australian actor, comedian, author, and artist who is best known for his performances on several Australian TV shows, one of them being ‘Dancing With The Stars’.

He was born on June 2, 1977, in Vietnam. Anh is currently 45 years old. He is the son of Hien and Tam Do. Also, he has brothers named Khoa Do and Tram Do. His brother, Dhoa Do is a film director and also he has acted in several of Khoa’s films like ‘Footy legends’.

Anh holds Australian and Vietnamese citizenship but his ethnicity is unknown.

He attended the University of Technology, Sydney and studied a combined Business Law degree and then attended St Aloysius’ College in Milsons Point for his secondary education.

Anh Do: Professional Life and Career

He began his career at the age of 14. He used to breed tropical fish and then went on to sell American-Indian artifacts in a stall he owned and later, he expanded the business to four stores.

Before six months from completing his education, law firms offered him jobs which required 60 hours of a week but he opted to take up stand-up comedy instead. Also, he has cut back on comedy in order to focus on painting full time since 2013.

Anh Do: Net Worth, Income, Salary

The talented personality must have accumulated a huge sum of money from his career however, he has not disclosed his exact net worth, salary, and income. But as some sources have calculated, his net worth is around $20 million. as of 2022.

Anh Do: Rumors and Controversy/Scandal

He is successful in keeping himself far from rumors and controversies in his personal and professional life to date.

Anh Do has black eyes and black hair. But, other information regarding his height, weight, shoe size, dress size, etc. are not available.

Photos of Anh Do

The life tale of the Happiest Refugee Anh Do-the Vietnamese refugee of Australia!

Mary L Trump, Donald Trump’s lesbian niece files a lawsuit against him in Manhattan Supreme Court accusing him of fleecing her of millions of dollars!