Is Anitta Single or Dating?

Anitta is currently single and is not dating anyone. She is a bisexual who is a part of the LGBTQ+ community and has a long dating history.

Anitta dated Diego Raphael Villanueva, a singer, and songwriter from 2011-to 2012. They publicized their relationship through a photo session. But, later they ended their union in 2012.

Anitta was romantically hooked up with the Neymar, a soccer star in 2013. The couple was spotted being cozy after the event but, broke up in the same year.

Anitta was spotted hanging out with Arthur De Carvalho Mattos in 2014 and confirmed their union in February. Later, the couple separated in April 2014.

She hooked up with Lucas Lucco, a singer in 2015. According to the sources, it is known that the couple got closer while working on his single, ‘Beijar a Quiema Roupa.’

Anitta was spotted with Maluma, a Colombian singer and songwriter in February 2016. They got closer while working on the collaboration of their single, Sim ou Nao.

Anitta was married to Thiago Magalhães, a businessman on November 17, 2017. Later, the duo ended their marriage in September 2018.

From June 2019 to August 2019 she was romantically linked up with Pedro Scooby.

Moreover, she was dating Gui Araújom a television host in May but their short-lived relationship ended on June within 2 months. 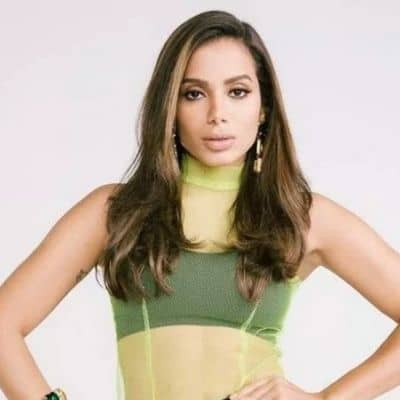 Anitta is a popular  Brazilian singer, songwriter, actress, dancer, businesswoman, and TV presenter. She rose to prominence with the release of her single titled, ‘Show das Poderosas’ in 2013.

Anitta was born in Rio de Janeiro, Brazil on March 30, 1993. Anitta is 29 years old as of 2022 and holds Brazilian nationality. Her ethnicity is Portuguese and Aries is her birth zodiac sign according to the astrological chart.

Larissa de Macedo Machado is her full birth name while Anitta is her stage name by which name she is famous.

Mauro Machado is her father’s name while Miriam Macedo is her mother’s name. She has a brother named, Renan Machado who is an artistic producer.

No info about her educational background are disclosed yet.

Anitta started her singing carer at the age of 8 by performing in the choir of Santa Luzia Church based in Rio de Janeiro.

Her own mother taught dance lessons and completed a course in administration at a technical school based in Rio de Janeiro at the age of 16. In the following year, she was awarded the ‘The revelation of Music ‘ award.

She was able to impress funk carioca producer, Renato Azevedo with her unique singing skill after which she signed a contract with the independent recording label Furacão 2000. Then, her debut single, ‘Eu Vou Ficaar’ was released on a radio station based in Rio de Janerio.

On May 16, 2012, she debuted her television appearance on the TV show, ‘Cante se Puder’ singing ‘Exttravasa’ by Claudia Leitte that aired on SBT.

After the success of her song, ‘Meiga e Abusada’ based in Rio de Janeiro she signed with Warne Music Group in January 2013.

In the same year, her other song ‘Show das Poderosas’ gained significant recognition by the media. It grossed 130 million views and became the most viewed music video on YouTube in Brazil.

She debuted as a TV hostess on the Multishow program Música Boa Ao Vivo in its 3rd season. J Balvin featured Anitta on his remix song, ‘Ginza.’

She went on to feature on singles like, ‘Loka’ by female duo Simone & Simaria, and her collaboration with Australian rapper Iggy Azalea, came to be her first single in English to be released.

Collaborating with the band, ‘Psirico’ she released the single, ‘Jogação’ in January 2020. Her song ‘Me Gusta’ was launched on September 18, 2020, by collaborating with Cardi B and Myke Towers.

Moreover, on 3 January 2022, she announced that she had signed a publishing contract with Sony Music Publishing.

Anitta has an estimated net worth of around 50 million USD while her salary and income are not disclosed yet.

Anitta has maintained a low profile which has not involved her in unnecessary rumors and controversies.

Moreover, She has brown colored hair and eyes of the same color.

Moreover, there is an official Facebook page under her name, Anitta which has garnered 16 million followers.

She also has a self-titled youtube channel, which has about 16.2 million followers.

Besides that, she is also active on Tiktok with over 17.4 million followers and 111.9 million likes.