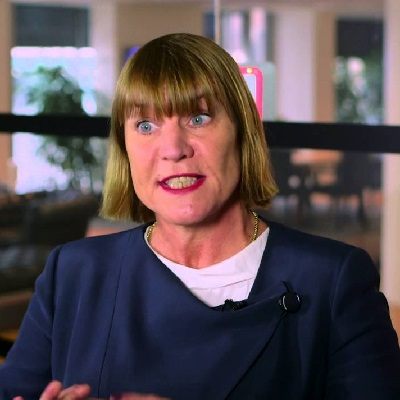 Anji Hunter is a married woman. Her husband, Adam Boulton is a journalist and broadcaster. They exchanged vows on the 22nd of July 2006.

Previously, she was married to Nick Cornwall. Her ex-husband, Nick is a landscape gardener by profession. They were married in 1980.

They parted their way with a divorce. However, the details about the divorce are still a mystery.  Together, they have two children.

Who is Anji Hunter?

Currently, she is the senior advisor of the PR consultancy, Edelman.

Anji Hunter was born in 1955 in Kuala Lumpur, Federation of Malaya. At the time, Kuala Lumpur was a part of the British empire.

Her birth name is Angela Margaret Jane Hunter. She is of British-Scottish-Irish ethnicity.

Till the date, she has not named her mother, father, and siblings. However, there is little known about her father who happens to be a manager. He used to manage a rubber plantation.

Talking about her educational background, she attended St Leonards School in St Andrews, Scotland. Later, she moved to England where she attended St Clare’s, Oxford at Oxford, Oxfordshire.

After that, in 1987, she graduated from the Brighton Polytechnic with Honors in History and English. At the time, she was already the mother of two children.

Professionally, Anji Hunter started her career as a temporary research assistant of Tony Blair after graduation. As a research assistant, her primary tasks were to prepare speeches for Blair. Soon, she started getting involved in the election campaigns too. Also, she gave political advice to Blair.

In 1997, Blair became the prime minister of the nation. After that, she was named as the Director of Government Relation for Blair’s government. Hence, she was also called the gatekeeper of the Blair Government.

Prior to that, she was associated with Anglo American plc as the head Government and Social affairs.

In 2013, she joined as the senior advisor for Edelman. In the PR and marketing consultancy, she is responsible to counsel her clients regarding reputation and crisis management and public affairs.

Till the date, she has not disclosed any details regarding her net worth. However, her net worth is possibly in the range of 7 digits number.

Before that, as director of Government relations, her earnings were in the range of £120 Thousand.

Back in 2002, she has been in the headlines of the news. At the time, her relationship with her now-husband, Adam Boulton became the front-page news.

Both of them were married to their former spouses when they were in a relationship.

Anji Hunter is a blue-eyed brunette. She has a decent height with an average weight. However, details on her body stats are not available yet.

You may also read the bio of Candice Bergen, Sarah Elizabeth, and Matt Rhoades.