Who is Anmol Narang? Know about her journey to become Second Lieutenant being first observant Sikh, biography

Posted by MarriedBiography Posted on June 15, 2020 | In Interesting Facts
Share this 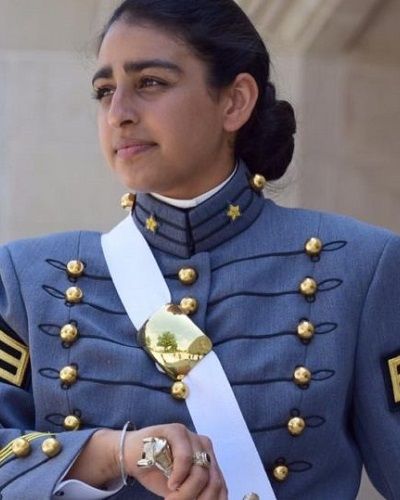 Anmol Narang has become the first observant Sikh to graduate from United States Military Academy at West Point. Second Lieutenant Anmol Narang will be making efforts to represent her religion and community will encourage Americans to learn more about Sikhism.

“It’s an incredible feeling. It’s a humbling experience, I have never worked harder for anything in my life. Being a Sikh woman is a very important part of my identity and if my experience can play a small role in being an inspiration for others, regardless of the career field, that will be wonderful.”

Among the 1107 graduates including other Sikhs, she is one of the ones who became the first observant Sikh to graduate from West Point. She was not required to compromise her faith as past Sikh graduates had been required to under the regulations since discarded.

Likewise, she did not have to cut her hair as women are exempt from the personal grooming regulations which forced her Sikh predecessors to violate the religious rules against cutting their hair and beard.

“I am excited and honored to be fulfilling my dream of graduating from West Point. The confidence and support of my community back home in Georgia has been deeply meaningful to me, and I am humbled that in reaching this goal, I am showing other Sikh Americans that any career path is possible for anyone willing to rise to the challenge.”

Also read Who is Sunrise Coigney? Know about her married life with Mark Ruffalo, children, net worth and more biography

Anmol Narang was born in Rosewell, Georgia by Sikh immigrant parents. Her parents moved from India to the USA in the 2000s. Narang is 23 years old born in 1997.

She was raised in Georgia as well. She attended her high school in a local institution in Georgia. When she was in school, her parents took her to Pearl Harbour National Memorial in Hawaii. At the time, she was inspired to enter the US Army and serve the nation. She said,

“Seeing the sacrifice those people made and the results of that sacrifice was really impactful. I stayed until it closed, then worked on my application when I got back to my hotel room.”

Similarly, she completed her under-graduation from Georgia Institute of Technology before entering the West Point Military Academy. After attending West Point, she studied nuclear engineering to learn about air defense systems and continued on the path to becoming the first observant female Sikh militant in the US Army.

Anmol’s maternal grandfather was also from an army background. He served in the Indian army. Also, she said,

“My grandfather was in the Indian Army. It was always a big part of my life and something I was always interested in,”

Likewise, Narang is quite private about her life. She has not disclosed her family members. She is also not active on social media Instagram and Twitter.

After being Second Lieutenant now Anmol Narang will complete her Basic Officer Leadership Course in Oklahoma. She will complete the course by the end of 2020. The completion of the course will lead her to her first posting in Okinawa, Japan. Similarly, she will move on to become a full-fledged militant in January 2021. Also, she said,

“I am showing other Sikh Americans that any career path is possible for anyone willing to rise to the challenge.”

She hopes that her efforts to represent her religion and community will encourage Americans to learn more about the Sikh faith, the fifth largest religion in the world. Likewise, Narang’s graduation marks an incredible success for Sikh Americans. In the year 1987, Congress passed a law prohibiting various religious communities, including Sikhs, from practicing certain articles of their faith while serving in the military.