Updated On December 18, 2022 | Published By: Katie Randall
Share this
Single 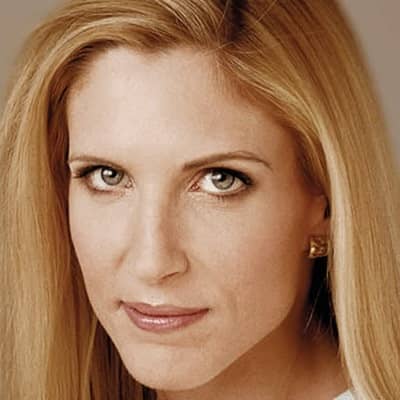 There are lots of bad Republican, there are no good Democrats.

I've decided to cut out the part of the speech where I say anything nice about Democrats.

They've hit us and we've got to hit hard, and I'm not just talking about the terrorists.

Coulter has been engaged several times, but up to this date, she has never married. In October 2007, she began dating Andrew Stein.

Likewise, on January 7, 2008, Stein told in the post that the relationship is over. As in 2017 coulter started dating her security guard. Ann has also dated Dinesh D’Souza in 2013 and Bob Guccione in 1990s.

In 2006, Ann stared appearing on several occasions with David Wheaton, they were romantically linked.

Who is Ann Coulter?

Ann Coulter is an American Conservative media pundit, Lawyer, Columnist, & best-selling author. She is best known for her work on like Sharknado 3: Oh Hell no!, Real-time with Bill Maher, and Comedy Central Roast of Rob Lowe.

Ann Coulter was born on December 8, 1961, in New York, USA. From August 9, 2011, she is a registered Republican and was a former member of the advisor council of GOProud. Ann Coulter belongs to all-American ethnicity.

She is the daughter of John Vincent Coulter and Nell Husbands martin. She has two brothers Jhon Coulter and James Coulter.

Ann Coulter is the author of twelve books which includes THE NEW YORK TIMES BESTSELLER LIST, HIGH CRIMES AND MISDEMEANORS: THE CASE AGAINST BILL CLINTON (1998).  SLANDER: LIBERAL LIES ABOUT THE AMERICAN RIGHT(2002)

TREASON was published in 2003 and HOW TO TALK TO A LIBERAL: THE WORLD ACCORDING TO ANN COULTER was published. GODLESS: THE CHURCH OF LIBERALISM(2006).

Moreover, she wrote IF DEMOCRATS HAD ANY BRAINS, THEY’D BE REPUBLICANS and GUILTY: LIBERAL ‘VICTIMS’ AND THEIR ASSAULT ON AMERICA on 2007 and 2009 respectively.

In the same vein, Coulter’s eighth book DEMONIC: HOW THE LIBERAL MOB IS ENDANGERING AMERICA. Similarly, her ninth book MUGGED: RACIAL DEMAGOGUERY FROM THE SEVENTIES TO OBAMA published in September 2012.

Likewise, she penned her tenth book NEVER TRUST A LIBERAL OVER 3– ESPECIALLY A REPUBLICAN released on October 14, 2013.

Her latest book, ADIOS, AMERICA: THE LEFT’S PLAN TO TURN OUR COUNTRY INTO A THIRD WORLD HELLHOLE was published on June 1, 2015.

In the late 1990s, Coulter was featured on six conservative websites in addition, to her own website. Likewise, Coulter worked as a columnist in 1999.

In July 2006, some newspapers replaced Coulter’s column with other conservative columnists.

Ann Coulter features in three movies in 2004 named THE BEAST, FAHRENHYPE 9/11 and FAHRENHEIT 911. Meanwhile, in 2015, she became vice president in the movie named SHARKNADO 3: OH HELL NO!

Ann Coulter has Green eyes with blonde hair. She stands at a height of 6 feet with a body mass of 67 kg.

In April 2017, “Black-ish” creator Kenya Barris told that Walker was dating Coulter. However, this dating rumour was in the limelight for some time. However, her friends and insiders told they are not dating the reporters.

Likewise, on Instagram, she has moreover than 13 hundred followers.

You may also like to read Tucker Elliot, Christmas Abbott, and Robinne Lee.

The Twitter war over flight seat reassignment! Delta Airlines hits back at Ann Coulter instead of apologizing! Read about the controversy here!