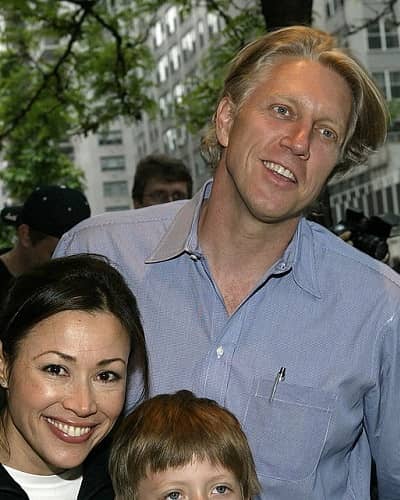 FIX Flyer is a provider of connectivity, trading, and financial messaging software and services founded in 2005. Brian led the development of mission-critical software and systems for the Galileo, Voyager, and Hubble space missions.

Similarly, Brian has received three NASA accommodations for his leadership in developing software systems. In the year 1995, he took his engineering and technology skills to Wall Street where he joined Blackrock –a leading fixed-income money manager. Also, he speaks at financial service industry events and holds additional degrees in engineering and business.

Brian Ross and Ann Curry met each other in the mid-1970s when he was a student at the University of Oregon. After graduating from the University in the year 1978, they had a long courtship. They walked down the aisle on 21st October 1989.

They currently reside in New Canaan, Connecticut. Together, Brian and Ann have two children McKenzie and William Walker Curry Ross. Their daughter McKenzie has stepped into the modeling world.

Brian and Ann have been married for 31 years old. They have been living together happily without any divorce rumors. They maintain a perfect married life.

How much is the net worth of Brian Ross?

Brian Ross might earn huge earnings from his work as a Software Executive. He has an estimated net worth of $2 million. His wife Ann Curry has a net worth of $20 million.

In the year 2003, Brian and Ann bought an Upper West Side Brownstone in New York’s Manhattan for $2.9 million.

Ann has done charity in Multiple Myeloma Research Foundation, AmeriCares, Save the Children, Medecins Sans Frontieres, Airline Ambassadors International, buildOn, and more. She is the national and international correspondent-anchor for NBC News and Today Show. Similarly, she was the anchor of Dateline NBC from the year 2005 to 2011.

“I still don’t really understand. I know I did nothing wrong. Also, I know I was good at my job.”

It was rumored that the cause of her exit was her lack of chemistry with Matt Lauer. As per sources, Lauer played a part in forcing Curry out. Ann said,

“The bottom line is that it still hurts. It honestly hurts really deeply, because I really think I did nothing wrong. But in spite of the pain of it, which still lingers, I know that I contributed to some people suffering less. But I tell you, it was tough. It was hard to walk that line, to not add more [suffering]. Boy, oh boy, was it tough.”

Curry was shocked when she was fired. But she is stronger now. She said that she has changed for the better.

Ann Curry is an American journalist and photojournalist. People mostly know her for reporting on the wars in Syria, Darfur, Congo, Lebanon, Israel, Afghanistan, and Kosovo among others.