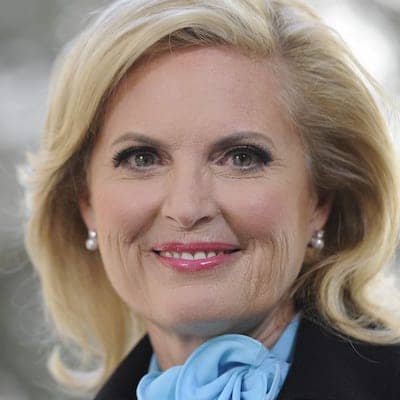 I made a choice to stay home and raise five boys. Believe me, it was hard work

It's been quite an experience, being conservative and living in the North East

We need to respect choices that women make.

Ann Romney is currently married. Despite facing criticism from her family, she exchanged vows with Mitt Romney on 21 March 1969.

They started their affair in 1965 and reconnected in the year 1968 and decided to tie the knot soon.

Who is Ann Romney?

Ann Romney is an American equestrian and author. She is also a philanthropist and was First Lady of Massachusetts.

Moreover, Ann is the wife of a businessman and politician, Senator Mitt Romney. She was also active in 2008 and 2012’s presidential campaigns.

She was born as Ann Lois Davies on 16 April 1949 in Detroit, Michigan, United States. The name of her father and her mother’s name was parents Edward Roderick Davies and Lois (Pottinger) Davies respectively.

Ann’s ancestry is Caucasian and has two brothers.

Talking about her academics, she first went to Harvard Extension School and Cranbrook Schools.

Then Ann enrolled at Brigham Young University. She was also at Stanford University but only for. a year.

She is also an equestrian and is fond of riding horses. Due to her skills, she has won a gold medal in 2006a and a silver medal in 2005 at the national level.

Ann is also a philanthropist and supports many charities. She is associated with organizations like Ten Point Coalition, Families First, United Way of Massachusetts Bay, Stand for Children, and more.

When her husband was appointed as a governor, she also became First Lady of Massachusetts and served as governor’s liaison from 2003 till 2007.

At present, her estimated net worth is around 50 million dollars. However, her salary and other earnings are unknown.

Her spouse, Mitt has assets worth $250 million.

This author is keeping herself away from rumors at present. But she has suffered from breast cancer in the year 2008.

Also, she was a patient with multiple sclerosis. She was diagnosed with it in 1998 and recovered after using traditional medicine and therapies.

Regarding Ann Romney’s body features, her height and her body weight are average. Moreover, her eyes are grey with blonde hair.

Ann is active on social networking sites. Her Facebook and Twitter accounts are followed by more than 688k and 169k people.