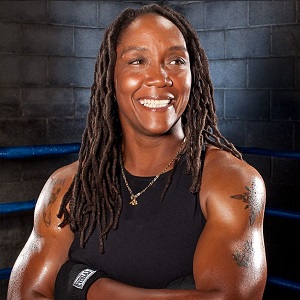 I sent a lot of ladies to the hospital. If you go and look at my record, a lot of the people I knocked out never fought again, or maybe one time and that was it

I was putting middleweights, Light heavy's, heavies and Super Heavy's to sleep. And it got to a point where no one would fight me, so I retired. I will never box again because I went 2 years and no one would fight me at all, zero. That's when I started training fighters.

Ann Wolfe is a married woman. Her husband and marriage details are not known but according to the sources his profession is a dealer.

She has two children. Her eldest child is a girl and her name is Jennifer Wolfe-Fenn, who is also a boxer. Her second child’s name and details are unknown. Ann is living happily with her husband and children.

There is no information on her past affairs.

Who is Ann Wolfe?

Ann Wolfe is an American female boxer. She held world titles in four different weight classes simultaneously. Wolfe is regarded by many within the sport as the hardest puncher and best fighter in the history of women’s boxing.

She appeared in the 2017 film Wonder Woman in the supporting role of the Amazon Artemis.

Wolfe was born as Ann Wolfe on 17 January 1971, in Austin, Texas, the United States of America. She grew up in Oberlin, Louisiana, and spent part of her childhood in Los Angeles.

Other than this, there is no much information regarding Wolfe in the mainstream media. This includes the info on the whereabouts of her parents, siblings, early childhood days, etc.

Similar is the case on the information regarding her educational background and educational qualifications as well.

After being homeless and working construction, Ann Wolfe met her original trainer ‘Pops’ Billingsley. Under Billingsley’s tutelage, she fought her amateur fights and started fighting as a professional for RPM Promotions.

Ann had a record of 3-1 as an amateur boxer and fought at the 1998 U.S. National Championships. She won a decision over Tami Hendrickson from Seattle in the quarterfinal by 50-39, then went on to stop Shanie Keelean from Chicago within 46 seconds of the first round. In the semifinal, she lost to La’Kiea Coffen by disqualification at 1:23 of the third round.

Wolfe made her professional debut by beating Brenda Lee Bell by a four-round decision. Her first and only career loss came four fights later when she was knocked out in three rounds by veteran and the future world champion Valerie Mahfood.

Next in her career’s title list was the vacant IFBA World Super Middleweight title, which she picked up by knocking out Marsha Valley in six rounds. She and Valley fought again, this time with the vacant WIBC’s version of the title, which Wolfe won by knockout in round ten.

Wolfe avenged her defeat against Mahfood by taking the NABA World Super Middleweight Championship from her with a ten-round decision.

On May 8, 2004, Wolfe emulated Henry Armstrong’s record of three world titles at the same time in different weight classes, by gaining the IBA world Light Heavyweight championship, knocking undefeated champion and former NCAA basketball star Vonda Ward at one minute and eight seconds of Round One.

Ward had a neck concussion as she hit the canvas with her neck when she fell. Ward was taken to the hospital in serious condition due to the damage to her neck and head, but she recuperated. This bout was nationally televised from Biloxi, Mississippi and the TV commentators called it “the best knockout punch … in a women boxing match”.

Wolfe last fought in the ring in 2006, knocking out Cassandra Giger and Lisa Ested. Since then, she has indicated that she is finished with her own boxing, preferring to work as a trainer.

Wolfe has trained many amateurs and professional boxers, including her oldest daughter Jennifer Fenn and rising Middleweight prospect James Kirkland.

She was cast by director Patty Jenkins in the supporting role of the Amazon warrior Artemis in the DC comic book flick adaption of Wonder Woman in 2017.

Her salary is not known but she has a net worth of $3 million.

There are no significant rumors and controversies in the mainstream media to date. She has thus far, managed o keep her image clean in the eyes of the general public.

Ann Wolfe has a height of 5 feet 9 inches with bodyweight 75kg. She has black hair color and her eye color is dark brown. There is no information about her shoe size.

To know more about Allison Williams, Olivia Thirlby, and Sarah Sokolovic, please click on the link.

Like Mother Like Daughter!! Daughter of Ann Wolfe Choose The Same Career Alike Her Mother; Let’s See What She Have To Say About Her Husband And Family Life