Anna Cathcart is an actress seen in 'To All the Boys I've Loved Before', 'Odd Squad', and 'Odd Squad: The Movie'.

Anna Cathcart is single. She is just sixteen years of age and has no boyfriends till now. She is very much focused on her career and studies right now. 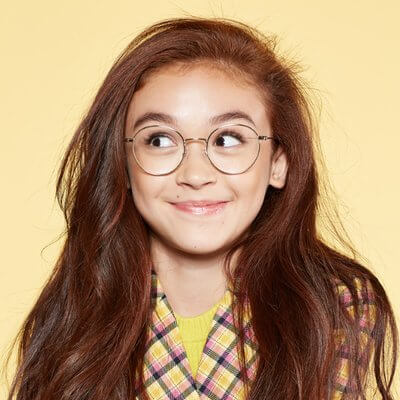 Who is Anna Cathcart?

Anna Cathcart is a Canadian child actress. She is popular for her work in ‘To All the Boys I’ve Loved Before’, ‘Odd Squad’, and ‘Odd Squad: The Movie’.

She was born to Canadian parents. However, Anna has not revealed their names and other information about them. She has one sister, Sara.

Her ancestry is Scottish.

Talking about her education, she is still in school. She goes to a regular school in Vancouver, Canada.

Anna Cathcart started her career at the age of 8 by appearing in a ‘Crayola and Campbell’s Soup’ commercial. After some time, she was contacted by a scout and auditioned for the ‘PBS’ comedy series ‘Odd Squad.’ Cathcart was selected to star in the lead role of ‘Agent Olympia’ in the series which aired in 2014.

In 2015, she joined the cast of ‘Odd Squad‘ in the second series. Similarly, in 2016, she was once again selected to play the role of ‘Agent Olympia’ in the movie version of ‘Odd Squad.’

In 2017, she played the role of ‘Robyn’ in 2 episodes of the educational TV program, ‘Dino Dana.’ She also auditioned and landed the role of Dizzy Tremaine in Disney’s original film ‘Descendants 2’.

This became one of her most significant roles as the critics loved her and she gained a lot of fame from this role. The same year, she appeared in the American fantasy drama ‘Once Upon a Time’.

In 2018, she appeared as Kitty Covey in the Netflix movie, ‘To All the Boys I’ve Loved Before.’ The film which is based on a book by Jenny Han is a global hit. Other stars in this movie include Noah Centineo, Lana Condor, among others.

Anna Cathcart has an estimated net worth of around $1 million according to some notable online sources. Her net worth is expected to keep increasing in the coming years.

However, there is no information about her salary. An average child actress earns around $54k annual salary. So, she might be earning a similar amount too.

There are no rumors about Anna. Also, there are no controversies surrounding her. She has not been a part of any controversies too. She is focused on her career and is well-loved and respected by her colleagues.

Anna stands at a height of around 5 feet 1 inch. She weighs around 45 kg. She has brown hair and brown eyes.

You may also like to read the Bio, Career, Body Measurements, Social Media, Net Worth, and others of Priah Ferguson, Kennedy Brice, Millie Bobby Brown, and more.

Tags : Canadian child actress To All the Boys I've Loved Before