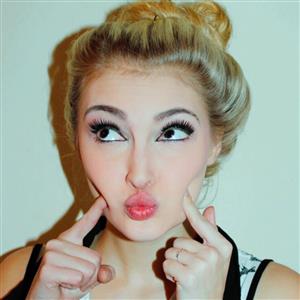 Anna Faith is in a relationship with Matthew Rippy. The duo had been together for quite a while before getting engaged on July 30, 2017, at the Gaylord Palms in Orlando, Florida. They can often be seen together attending various events or just enjoying one another’s company. Similarly, he also appears in her Instagram feed quite frequently.

Who is Anna Faith?

Anna Faith is an Instagram model and cosplayer. She is also popular for impersonating the character of Queen Elsa from the Disney animated film Frozen.

Anna Faith was born in Daytona Beach, Florida, the United States on November 21, 1995. Her birth name is Ariana Faith Carlson and she is currently 23 years old. Her father’s name is Jim Carlson and her mother’s name is Karen Carlson.

She has a sister namely, Lexus Grace Carlson. Anna holds American citizenship, but her ethnicity is unknown. Her birth sign is Scorpio.

Talking about Anna’s education history, she graduated from high school in 2014, but the name of the school is unknown.

During 2014, she came into limelight when she discovered for the role of Elsa through her Instagram account for the animated film Frozen. For this film, the dress for Elsa to be used in the shots of the screening was made by Anna’s mother.

Carlson started to appear as the cosplay for the characters in the films as well as from the comic books, such as Harley Quinn from Batman and Rey from Star Wars. Similarly, she has also portrayed the characters from the films Maleficent, Spider-Man, Cinderella, and Harry Potter.

Likewise, in 2015, she named as one of the Top 7 Sexiest-Cosplayers. Then, she and her sister are known by the name of  ‘Frost Sisters’.Whereas, she received the title of Queen of Disney Cosplay due to her portrayal as the Disney-Princess in the Disney movies.

This talented woman has shown her new Cosplay of “Wonder Woman” on Apr 2017.  She was honored with one of the best cosplayers to arrive at the Entertainment Expo as well as Chicago Comic.

The talented model must have accumulated a huge sum of money from her career but she has not disclosed any data about her net worth, salary, and income.

The 23 years old model has maintained her celebrity status and has not harmed any other person in her career. Currently, she is far from rumors and controversies.

Anna Faith has a height of 5 feet 6 inches. Additionally, she weighs 60Kg. Anna’s hair color is blonde and her eye color is light brown.

Also, read the affair, salary, the net worth, controversy, and the bio of Kelsey Owens, London Goheen, Jonathan Groff