Anna Faris is an American actress who appeared in the movie, Scary Movie, and television sitcom Mom. Currently, Anna is engaged. However, she was in the limelight for her marriage with Chris Pratt. 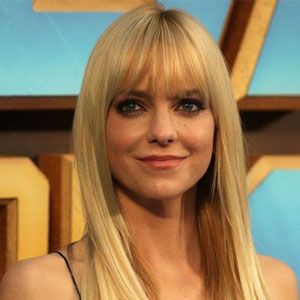 I try to keep my head on straight and take nothing for granted.

Yeah, I do like scary movies, especially the ones that don't take themselves too seriously.

I'm not a very good lover. I'm so nervous about my sexuality.

Anna Faris is engaged to Michael Barrett in November 2019. However, the news was confirmed by Anna in February 2020 on The Late Late Show. Michael is an American cinematographer. They met for the first time in 2017 and started dating since fall 2019. Michael proposed to her with a yellow diamond ring.

Previously, she dated actor Ben Indra shortly after they met on the set of Lovers Lane. They married in June 2004. Faris filed for divorce in April 2007 citing irreconcilable differences.

As part of their divorce agreement, finalized in February 2008, she agreed to pay Indra $900,000 in addition to other property and acting royalties.

Faris met actor Chris Pratt in early 2007 at the table read in LA for the film Take Me Home Tonight. They started dating shortly after, became engaged in late 2008, and married on July 9, 2009, in a small ceremony in Bali, Indonesia. The couple together has a son, Jack Pratt, born in August 2012.

But the couple has announced that they are going to split mutually and file for divorce. And the reason for their divorce is said to be their view on a growing family.

Anna wants to have kids and wants a traditional family whereas Chris is at the peak of his career so he is more focused on his career and can’t give much time to his family.

Who is Anna Faris?

Anna Faris is an American actress and singer. Her breakthrough came with the role of Cindy Campbell in Scary Movie, which spawned a film franchise.

She appeared in the subsequent 3 sequels of the movie, with her last appearance being in the fourth installment, released in 2006.

Anna received critical praise for her role in Smiley Face and then starred in The House Bunny, which earned her an MTV Movie Award nomination for Best Comedic Performance.

Faris has played Christy Plunkett on the CBS sitcom Mom since 2013. The show has earned the actress further critical and popular acclaim and 2 People’s Choice Award nominations.

Her father, Jack Faris was the vice president of internal communication at the Washington University then later he shifted to the Washington Biotechnology and Biomedical Association.

Her mother, Karen was a teacher at Seaview Elementary School in Edmonds. Anna is an American by nationality. She has a mixed ethnicity in English, German, Scottish, French, Dutch, and Welsh.

As regards to Anna’s childhood, Her family moved to Edmonds, Washington, when she was 6 years old. Faris has an older brother, Robert. He is a professor and sociologist at California University.

Faris attended Edmonds-Woodway High School, graduating in 1994. She then attended the University of Washington and earned a degree in English literature in 1999.

She gave her first professional acting performance when she was 9. She went on to play the title character in Heidi and Rebecca in Our Town. Faris’ first major film role came shortly after college with Lovers Lane (1999), in which she played an ill-fated cheerleader.

Faris’ break-out role came in 2000 when she starred in the horror-comedy parody film Scary Movie, portraying Cindy Campbell. It marked her first starring credit, as she had only appeared in small and supporting parts in theater plays and low-budgeted features until then.

For her performance, she received nominations for the Breakthrough Female Performance and Best Kiss Awards at the 2001 MTV Movie Awards. Faris subsequently reprised her role in Scary Movie 2 and 3 also.

Her next film appearance was in a supporting role in the indie horror May. Later in 2002, she starred in The Hot Chick. Afterward, Faris debuted on the last season of the sitcom Friends.

She filmed a small part in Brokeback Mountain in 2004. In 2005, she appeared in the comedies Waiting… and Just Friends. The role in the latter earned her nominations for 1 MTV Movie Award and 2 Teen Choice Awards.

She played Cindy Campbell for the fourth and final time in Scary Movie 4, which opened on April 14, 2006. Later in 2006, she appeared in My Super Ex-Girlfriend.

Faris headlined Smiley Face in 2007. She subsequently was cast in Mama’s Boy. In 2008, she had the starring role in The House Bunny. She appeared as Shelley, a former Playboy bunny.

She was nominated for MTV Movie Award for Best Comedic Performance. Faris’ first movie of 2009 was Frequently Asked Questions About Time Travel. She then co-starred in Observe and Report.

Later that year, she starred and served as executive producer of What’s Your Number? She followed this movie with voice-over reprise in Alvin and the Chipmunks: Chipwrecked.

In 2012, she played Zoey in the political satire The Dictator. Faris won the Star of the Year Award at the National Association of Theatre Owners.

Her first 2013 release was Movie 43. In the British romantic comedy I Give It a Year, she had the supporting role of Chloe. In 2013, she was cast in the main role of series Mom.

For her work on the show, Faris was nominated for 1 Prism Award and 2 People’s Choice Awards. Faris reprised her voice role in Cloudy with a Chance of Meatballs 2.

In 2014, she had an uncredited cameo in the closing-credits sequence of 22 Jump Street.

She launched Anna Faris is Unqualified, in November 2015, reprised the voice-over role in The Road Chip. In the 2016 action-comedy Keanu, Faris has a brief appearance as an exaggerated version of herself.

For the series, Mom, she earned $125,000 per episode in the first and second season. Later, the show started getting good TRP and from the third season, her income became $200,000 per episode.

There were rumors that Anna Faris accused her ex-husband Chris Pratt cheated on her. On the sets of Passengers, Chris was really close to his co-actor, Jennifer Lawrence.

So, Anna was insecure with the thought of her husband cheating on her. Recently, the couple had split and after the rumors of Jennifer Lawrence, the other reason for the couple’s split is rumored to be Chris’ career.

Due to his career, he is not being able to handle his wife and kids and also there are rumors that he does not want to expand his family.

Back in 2016, Anna has been in controversy due to her adopted pet. The controversy was due to the violated agreement with the owner of the dog(pet).

Also know more about the early life, career, net worth, relationships, and controversies of other actress and singer  including Brandi Cyrus, Amanda Holden, Meghan Andrews, Alexandra Lenas, and Sandra Bernhard.

Hollywood beauty Anna Faris is looking skinny! What is ailing her?

Social media and celebrity relationships! Learn what Anna Faris has to say about her seemingly sudden divorce!