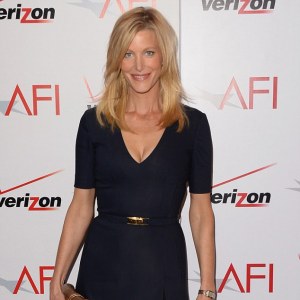 As an actress, I realize that viewers are entitled to have whatever feelings they want about the characters they watch. But as a human being, I'm concerned that so many people react to Skyler with such venom. Could it be that they can't stand a woman who won't suffer silently or 'stand by her man'? That they despise her because she won't back down or give up? Or because she is, in fact, Walter's equal?...

Anna is a divorced woman at the present time. She was previously married to the famous Scottish actor and real estate broker Alastair Duncan. They got married in 1990. The couple was married for almost two decades. After 19 years of their marriage, they divorced in 2009. During their long married period, the couple together had two daughters named Eila Rose Duncan and Emma Duncan. After her divorce with Duncan, she has not been in any confirmed relationships till now.

Who is Anna Gunn?

Anna Gunn is an American actress. She is best known for her role as Skyler White on the AMC drama series Breaking Bad, for which she won two Primetime Emmy Awards for Outstanding Supporting Actress in a Drama Series in 2013 and 2014. She also had a recurring role on The Practice and she was a regular cast member on HBO’s Deadwood.

Anna Gunn was born was born on 11 August 1968, in Santa Fe, New Mexico, USA. She is an American by nationality and she is of English, German, Polish, Slovak, and Irish ethnicity.

She is the daughter of Sharon Anna Kathryn Gunn an interior designer, and Clemens Earl Gunn, Jr., who worked in real estate.

She graduated from Santa Fe Preparatory School in 1986. After high school graduation, she attended Northwestern University, majoring in theater and she graduated in 1990. She also studied at the British American Drama Academy. After that, she shifted to Laurel Canyon, Los Angeles to pursue her career in the acting field.

Anna has been an active member in the film industry since 1992. Her first acting role was as Liz in an episode of the 1992 TV series Quantum Leap. That same year, she appeared as Celeste in the TV film Indecency. Since then, she has appeared in numerous movies and TV films. Gunn played a recurring role as Assistant District Attorney Jean Ward on the ABC series The Practice from 1997 to 2002. She was a regular as Martha Bullock on HBO’s Deadwood from 2005 to 2006.

Anna played the role of Skyler White on the AMC drama series Breaking Bad from 2008 to 2013.  For her performance in the series, she won two Primetime Emmy Awards for Outstanding Supporting Actress in a Drama Series in 2013 and 2014. In 2017, she appeared as Julia Ayres in the TV film Shades of Blue.

Anna Gunn:  Salary and Net Worth

She has a net worth of $5 million but his salary is not revealed yet.

Currently, there are no desperate rumors regarding her personal and professional life. Her character of Skyler in ‘Breaking Bad’ has not been liked by many and they have vented their hatred online. Anna Gunn had mentioned that she has even received death threats due to it, which has scared her. There was a Facebook group called ‘I Hate Skyler’ which had received many likes.