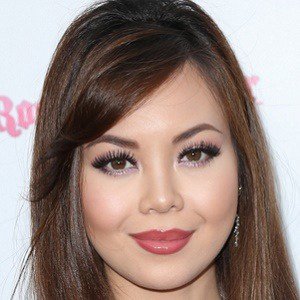 Anna Maria Perez de Tagle is currently in a relationship. She has been engaged to her long term boyfriend, Scott Kline, since November 11, 2018. The duo has not revealed their future plan and currently enjoying their blissful life.

Anna Maria Perez de Tagle is a popular American actress and singer, who is best known for her role as Ashley Dewitt on ‘Hannah Montana’. She is also well recognized for her role as Ella Pador on ‘Camp Rock’ and ‘Camp Rock 2: The Final Jam’.

She was born on December 23, 1990, in San Franciso, California, USA. She is currently 28 years old. Anna has got two brothers and she is the granddaughter of Filipina singer-actress Sylvia La Torre. However, Anna has not disclosed information about her parents.

Anna loves to design and make her own clothes. Her hobbies include snow skiing, dancing, singing, playing piano and reading.

She holds American citizenship and is of Filipino, Irish, and Spanish descent.

Anna made her television debut from the recurring role of Ashley Dewitt in the series ‘hannah Montana’ from 2006 to 2011. In 2006, she made her appearance as Miracle Ross in ‘Cake’. Her other notable television roles include Ella Pador in ‘Camp Rock’ in 2008, Jenna in ‘Baby Daddy’ in 2013, Lainey in ‘Charmed’, etc.

She was requested by former first lady Mrs. Nancy Reagan to sing ‘I Dreamed A Dream’ and ‘Someone Like You’ at the Ronald Reagan Library in Simi Valley, California.

She was voted the Best Featured Female Artist in a Musical at the 2012 Broadway World Awards.

Talking about her net worth, salary and income, she has not disclosed any data however, it is under review.

There was a rumor that she was in an affair with Drew Seeley but the rumor has ended as she is engaged now with her boyfriend Scott Kline.

She has a height of  5 ft. 1 inch and she weighs 46 kg. Also, Anna has got black hair and light brown eyes. Information regarding her body measurement, shoe size, dress size, etc. are unknown.