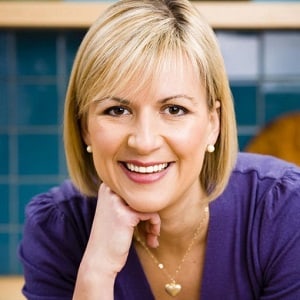 Anna Olson is a married woman. She is married to Michael Olson. She met Michael while she was a pastry chef at Inn on the Twenty in Jordan. The pair married on October 2, 1999. Furthermore, the marriage is going strong as there is no news regarding any extramarital affairs at present.

Who is Anna Olson?

Anna is a Canadian-American pastry chef. People mostly know her as the previous host of Food Network Canada’s ’Fresh with Anna Olson’ and ‘Sugar and Kitchen Equipped.’

Olson was born in Atlanta, Georgia on May 4, 1968. She was born to parents Donna and Andy Tomcik. After her parents emigrated to Toronto, Anna spent her childhood there. She was also intrigued by the world of cooking since her childhood years. Anna is of American and Canadian nationality. Furthermore, there are no details available about her ethnic background at present.

Talking about her education, Olson attended Queen’s University in Kingston and earned a degree in political studies and sociology. Additionally, she also enrolled in the College of Culinary Arts at Johnson & Wales University in Denver, Colorado.

Olson initially traveled across the United States after her graduation. In addition, she worked as a pastry chef at Inn on the Twenty in Jordan, Ontario for about 7 years. Additionally, since then, she has appeared in numerous cooking and other shows including ‘The Marilyn Denis Show’, ‘Confucius Was a Foodie’, ‘Inspired with Anna  Olson’, ‘Bake with Anna  Olson’, ‘Fresh with Anna  Olson’, ‘Twas the Night Before Dinner’, and ‘Sugar.’

Furthermore, Olson has authored several books to date including ‘Inn on the Twenty Cookbook’, ‘Sugar’, ‘Anna & Michael Olson Cook at Home: Recipes for Everyday and Every Occasion’, ‘Another Cup of Sugar’, ‘In The Kitchen with Anna: New Ways with The Classics’, and ‘Set for the Holidays with Anna Olson’ among others.  Furthermore, Anna has been featured for the promotions of Starbucks Coffee Canada. Additionally, she has appeared in television advertisements for ‘Splenda’, ‘KitchenAid’ appliances, and ‘Home Hardware.’

She garnered the Canadian Screen Award nomination in 2017 for her appearance in ‘Bake with Anna Olson.’ She received the nomination in the category of Best Host in a Lifestyle Talk or Entertainment News Program or Series.

Olson has not revealed her current salary. However, she has an estimated net worth of around $ 8 million at present.

Olson has not been part of any notable controversies in her career. Additionally, there are no rumors concerning her life and career at present.

Talking about her body measurement, Olson has a height of 1.68 m. Additionally, she weighs around 65 kg. Furthermore, her hair color is blonde and her eye color is dark brown.

Social media and celebrity relationships! Learn what Anna Faris has to say about her seemingly sudden divorce!