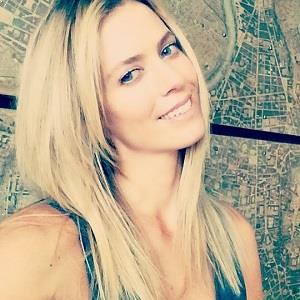 Anna Rawson is a married woman. She exchanged vows with a talent executive Ted Chervin.

They exchanged vows in the year 2013. This couple became parents of a child (daughter) in 2017.

Who is Anna Rawson?

Anna Rawson is an Australian professional golfer plus model. This player has played on the Ladies European Tour and the LPGA Tour.

She was born on Aug 5, 1981, in Adelaide, Australia. Her father is Jim Rawson and her mother was Dianna Rawson.

She also has an older brother Willy and belongs to Caucasian ethnicity.

However, as per the reports, Anna was 5 when her mother committed suicide due to depression.

She attended Immanuel College in Novar Gardens, Australia and has a Master of Business Administration degree from Columbia Business School which she obtained in May 2015.

She also played golf at the University of Southern California and was named All-Pac-10 honorable mention in 2001, 2002 and 2004.

Anna got her to break into a modeling career at age 16 when she was a finalist in the Australian “Dolly” Magazine cover contest. This provided her a perfect platform to raise her career as a successful model.

She then had golden modeling opportunities on the catwalk, in print ads, magazines, and on Television. Then from 1999, she started her golf career.

This talented player has won Jack Newton Intl. Junior Classic tournament plus Victoria Junior Champion. She was also the MVP in golf from her college’s team. Then she became the part of the LPGA Tour (2007).

Anna has kept her career away from any sorts of controversies to date. She is also not having any rumors regarding her professional and personal life.

This golfer plus model has an estimated net worth of $500 thousand. In addition, Anna is co-founder of a superfood supplement powders for a woman company named Seedlyfe.

Regarding Anna Rawson’s body features, she has blue eyes and blonde hair.