Updated On January 23, 2023 | Published By: Gill
Share this
Divorce 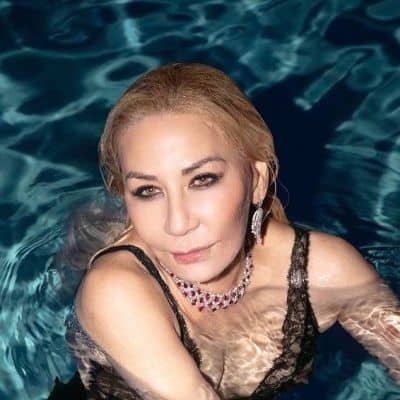 Who is Anna Shay husband?

Anna Shay has married four times but got divorced eventually. She claims she had divorced her husband in peaceful breakups. Although there is not any information about their identity. Anna has a son named Kenny Kemp.

There were rumors that she was dating cast member of Bling Empire Florent Bonadei but stated that he is just a good friend.

What is Anna Shay?

Anna Shay is a popular American Philanthropist and socialite, who is popular for the Netflix reality show ‘Bling Empire’.

The show is about a group of mega-rich Asians and Asian Americans living in Los Angeles.

Shay was born in Japan but raised in an Asian-American family to Ai-san(mother) and Edward Albert Shay (father). Both her parents were in business, her mom used to export pearl and silk flowers, while Shay’s dad was American Businessman and engineer. She is half Japanese and half Russian ethnicity and follows Christianity and holds American nationality.

Talking about her siblings she has one half-brother Jun from her mother’s previous relationship and one sibling named Allen.

Anna was enrolled in catholic school and later joined High school however, she graduate from the University of California.

Shay is a popular philanthropist and socialite who is a popular cast member of the Netflix reality show ‘Bling Empire‘ which is an American reality television series released on Netflix.

The series focuses on the life of wealthy, materialistic East and South Asian-Americans socialites based in the Los Angeles area. It is the first American reality tv series in which the main cast is all of East and Southeast Asian descent. She is the main reason the show is such an easy binge. The beautiful actress also worked as a board member for the George Lopez Foundation. The show is the perfect example of her acting career and though it is her first debut she did her acting very well in the series. Anna does not only involved in a series of NetFlix but is also a Fashion icon and an adviser.

According to the reports she has a personal Net Worth of $600 million as of 2023 along with luxury cars, Private Jets Shoes Clothes, Houses, etc. Her monthly salary is still not known yet.

The Bling Empire star Shay has been accused and sued by the ex-security guard for Sexual harassment and death threats made by her son.

Anna has a height of 5 feet 4 inches and weighs around 62 kg with a fair skin tone, Hazel pair of eyes and natural black hair color often dyed with different colors. Her body measurements are 34-22-35.

The beautiful actress has Instagram under the username @annashay93 and has garnered around 503k followers. But on other social media platforms, she is inactive.

Irina Shayk Reportedly Wants to Get Back with Ex Bradley Cooper after Amicable Split!