Anna Wintour is a renowned personality as the chief editor of ‘Vogue’ magazine. 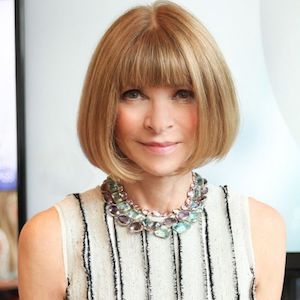 Part of the pleasure of editing 'Vogue,' one that lies in a long tradition of this magazine, is being able to feature those who define the culture at any given moment, who stir things up, whose presence in the world shapes the way it looks and influences the way we see it

To me, fashion is ceaselessly fascinating because it is an expression of self

I learned how important it is to lead and be decisive and to, in a way, empower other people to do their best.

Anna’s relationship’s status stands pretty bizarrely, to be honest. She was indulged in different relationships from a very young age. Early in her teenage at 15, she was connected to award-winning Novelist Piers Paul Read for some amount of time.

While she was 21 years old, she was in a relationship with another older boyfriend Richard Neville who was the editor of the magazine ‘OZ’.

She then had a relationship for benefits kind of connection with freelance journalist Jon Bradshaw. After she broke up with him, she dated French record producer Michel Esteban.

In 1984 she was married to David Shaffer who is the Irving Philips Professor of Child Psychiatry. They divorced in 1999 but had two children together. Following this divorce, she got involved in an affair with American telecommunications pioneer, John Shelby Bryan.

They got married in the year 2004. They are often seen together in public together in various fashion and fundraising events. The couple also enjoys traveling and attending U.S. Open tennis matches.

Who is Anna Wintour?

London-born Anna Wintour is a renowned personality as the chief editor of ‘Vogue’ magazine. Widely praised in the fashion world, she is also a fashion journalist and is major supporting personnel for young aspiring fashion designers.

She is also known for her trademark of pageboy bob haircut and dark sunglasses.

Anna was born to an English father, Charles Wintour who was the editor of the Evening Standard, London, and an American mother, Eleanor “Nonie” Trego Baker. Her ethnicity is mixed(English, Scottish, Dutch, French Huguenot) and her nationality is British.

She learned a lot about the presentation of different topics in the newspaper from her father. She grew up with an interest in journalism and fashion which would later define her personality. Anna was conscious of fashion from a young age.

She attended North London Collegiate School where she wouldn’t follow the dress code. She grew her interest in fashion from the early period of her childhood and teenage.

Anna started her career at an early age as fashion-related personnel. She did her first job at Biba boutique when she was 15. She took various fashions lessons and training programs at fashion school. But she eventually left it saying, “you either know fashion or you don’t’.

A lot of her early career moves were privileged by her bizarre relationship with older people. Most of them would be related to magazine companies or fashion industry-related personnel.

She started working as the first editorial assistant in Harper’s and Queens in 1970. Soon she quits all her works in the U.K. and moved to New York where she got a job as the editor at ‘Viva’, an adult women magazine.

She kept on moving with her fashion journalism interest and became fashion editor of New York. She went back to the UK to be the editor-in-chief of British Vogue for 2 years before she returned back to New York to be the chief editor there.

Her salary is supposed to be $2 million as editor-in-chief. This adds up her net worth to be $35 million.

Anna has faced several criticisms over her career. She is often condemned for promoting fur in the name of fashion outfits by Animal rights activists.

She uses her magazine to share her being the elite of feminism and beauty, she has faced major criticism from the critics and famous newspapers.

He has a height of 5 feet 6 inches tall and weighs 49 kg. She has blonde hair color and green eyes color. Her dress size and shoe size are unknown.