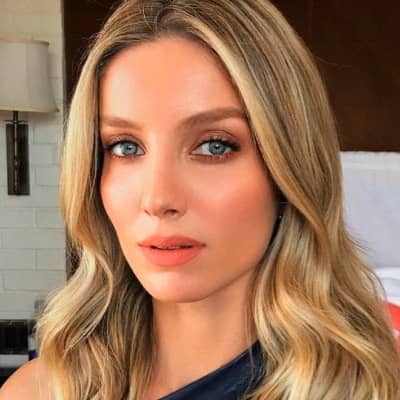 What is the relationship of Annabelle Wallis?

Annabelle Wallis is currently dating American actor Chris Pine since April 2018. They met at a party in Los Angeles but since, Annabelle was seeing someone else at that time the relationship did not hit off during the meet.

Previously, She was in a relationship with British singer Chris Martin from August 2015 to August 2017. Also, she performed vocals on the song “Up&Up”, the final track on the album A Head Full of Dreams by Martin’s band Coldplay.

Who is Annabelle Wallis?

Annabelle Wallis is an English actress who played the role of Grace Burgess in Peaky Blinders. Her recent movie The Silence of Mercy is in the post-production phase and the release date is to be announced.

Wallis was born on 5 September 1984 in Oxford, Oxfordshire, England to Irish parents. She had spent her childhood in Cascais, Portugal.

The 37-year-old English actress has a Virgo birth sign and has British Nationality. But, she was raised on a farm on the outskirts of Lisbon, Cascais after the family moved to Portugal when she was 18 months old.

Regarding her educational background, she went to Saint Dominic’s International School in Sao Domingos de Rana.

Introducing her family, her mother’s name is Marie Wallis and her father is Arthur Wallis. She belongs to a family where almost all the member is pursuing their career in the entertainment industry. Her older brother, Francis Wallis is a director.

Her brother has worked for fashion designer Michael Kors and singers Pixie Lott and Birdy. She also has English first cousins who are actors and directors, Jared Harris, Jamie Harris, and director Damian Harris.

She is related to Irish actor Richard Harris, maternal uncle of her mother. Her father was also related to English singer Marie Lloyd.

To begin with her career, she has featured in many English films, television series not only that she first debuted through a Bollywood movie.

She is renowned for portraying roles as Jane Seymour in Showtime’s period drama The Tudors (2009–2010). She also played Mia Form in the supernatural horror film Annabelle (2014).

Most noteworthy, she represented Jenny Halsey in the supernatural adventure film The Mummy (2017), and Madison Mitchell in the horror film Malignant (2021).

She has accompassed riches in millions (estimated $4.5 million) from her acting career. Her salary however is under review but she definitely earns a handsome paycheque.

Despite being in the glamour industry, there are no reported controversies relating to the English actress Annabelle Wallis. She has managed to keep a clean profile amongst the fans.

She has blonde hair and blue eyes, and she loves to dye her hair in different colors. Additionally, she has a fair body complexion.