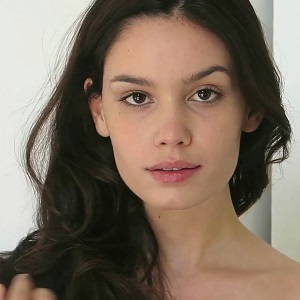 Anne De Paula is currently in a relationship with Joel Embiid. He is an NBL player and Philadelphia 76ers center. The pair was seen for the first time together in China in October when he participated in the NBC China Games. He credited his relationship as the main reason for not remaining actin in social media.

Also, he revealed that he is so much busy with his girlfriend that he even forgot the last time he really posted anything on social media. Anne is currently residing in New York City.

Previously, she dated Irish singer and songwriter, Danny O’Donoghue. He is the lead vocalist for the alternative rock band ‘The Script’. The pair began dating during the filming of the music video ‘No Good in Goodbye’ which finally ended after three years.

Who is Anne De Paula?

Anne De Paula is a popular Brazilian swimsuit model. She is based in New York and is associated with Wilhelmina Models. Also, she is also popular for being in a romantic relationship with NBA player Joel Embiid.

She was born on March 31, 1995, in Rio de Janeiro, Brazil. She is currently 23 years old. As she wants to maintain a low profile, she has not disclosed any information about her parents, siblings, and childhood.

Anne holds Brazilian citizenship but her ethnicity is Latin-Brazilian.

Talking about Anne’s educational history, she has not disclosed her educational institution’s names to date.

She was discovered by a modeling agency when she was 14 years old. After that, she has been immersing in vivid jaw-dropping shoots.

Anne De Paula along with Kate Upton has posed for Sports Illustrated’s Swimsuit edition in 2017. In addition, Anne has been represented by the Wilhelmina modeling agency. Furthermore, she has been on the magazine flaunting her luscious curves. Recently, she has been ranked in the list of the most popular model.

Her boyfriend, Embiid, is a Cameroonian professional basketball player. He is playing for the Philadelphia 76ers of the National Basketball(NBA). He was named to the preliminary team to compete in the 2017 FIBA AfroBasket in the Republic of Congo.

Anne is the winner of the Sports Illustrated Swimsuit Model Search contest in 2017. Besides that, she has not been awarded and nominated for her work.

She might have earned a decent sum of money from her modeling career. But her incomes and net worth are not disclosed.

There was a rumor regarding the relationship between Anne and Joel. Later, the rumor ended after both of them confessed that they are in love with each other.