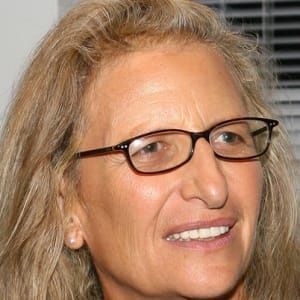 Nature is so powerful, so strong. Capturing its essence is not easy - your work becomes a dance with light and the weather. It takes you to a place within yourself.

In a portrait, you have room to have a point of view. The image may not be literally what's going on, but it's representative.

When I say I want to photograph someone, what it really means is that I'd like to know them. Anyone, I know I photograph.

I fight to take a good photograph every single time.

What is the relationship of Annie Leibovitz?

Annie Leibovitz had a beautiful relationship with her partner, Susan Sontag from 1989 to 2004. However, they did not like the word partners to describe their relationship. Annie and Susan traveled to several places together and resided in New York.

During an interview with the New York Times, Annie described her relationship with Susan as her lover, and she does not have any problem with it.

At the age of 52, Annie gave birth to their daughter, Sarah in 2001 but after three years of her birth, Susan died of Cancer.

In May 2005, she gave birth to twin daughters (Susan and Samuelle) with the help of surrogacy and is living a life as a single mother.

Who is Annie Leibovitz?

Annie Leibovitz is a famous American portrait photographer whose photographs have appeared in a number of magazines and publications. Likely, Annie Leibovitz is best known for her engaging portraits—particularly of celebrities—which often feature subjects in intimate settings and poses.

Additionally, she photographed John Lennon on the day he was murdered, and her work has been used on numerous album covers and magazines. She also became the first woman to hold an exhibition at Washington’s National Portrait Gallery in 1991.

Annie Leibovitz was born in Waterbury, Connecticut, the United States on October 2, 1949. Her birth name is Anna-Lou Leibovitz and she is currently 72 years old.

Her father’s name is Sam Leibovitz, a lieutenant colonel in the U.S. Air Force and her mother’s name is Marilyn Edith, a dance instructor.

Talking about Annie’s education history, she enrolled at the San Francisco Art Institute to study painting. She also continued honing her photography skills during this period.

She was deeply influenced by the works of photographers like Robert Frank and Henri Cartier-Bresson.

Additionally, she photographed the music band Rolling Stone extensively between 1971 and 1972. The band loved her work and signed her up as the concert-tour photographer for their Tour of the Americas in 1975. She got the opportunity to photograph the British singer Joan Armatrading in 1978 for an album, becoming the first woman to do so.

In the year 1980, Annie Leibovitz created one of her most famous works. She had a photo shoot with John Lennon for Rolling Stone magazine. Though initially, she planned on clicking him alone, she changed her plans and photographed him with his wife in an unconventional pose, thereby creating an iconic image.

Whereas, from 1983 she worked for the ‘Vanity Fair magazine and did an international advertising campaign for the American Express charge cards.

She took a photograph of a heavily pregnant Demi Moore for the ‘Vanity Fair’ in 1991. This set off a trend of other celebrities desiring to pose for photographs in advanced stages of pregnancy.

Over the next decade, she took several celebrity photographs, many of them in intimate positions. She shot Keira Knightley and Scarlett Johansson, both without clothes with a fully clothed Tom Ford for a 2006 issue of ‘Vanity Fair’.

She won the prestigious international advertising award, the Clio Award in 1987 for her celebrity photographs for an advertising campaign for American Express charge cards.

The Royal Photographic Society presented her with the Centenary Medal and Honorary Fellowship in 2009 for her significant contribution to the art of photography.

She has an estimated net worth of around $40 million (as per 2022 data) and she has earned that sum of money from her professional career.

Annie Leibovitz has a height of 6 feet. Additionally, her weight is unknown. Annie’s hair color is blonde and her eye color is hazel.