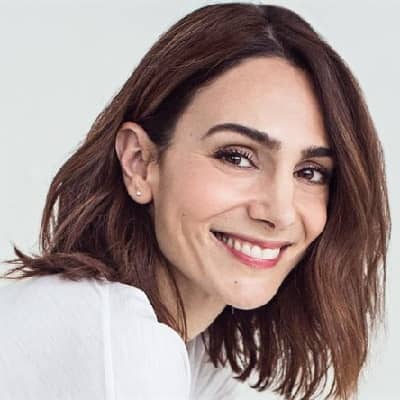 Annie Parisse is a married woman. She tied the knot with an American Actor, Paul Sparks. The lovers met and started dating in 2005 and tied the marital knot after some time.

They have two children namely Emmett (born in 2009), and a daughter, Lydia (born in 2014). Currently, she resides in Manhattan, New York City, New York with her husband and children. There is no such news of their separation and divorce.

Who is Annie Parisse?

Annie Parisse is an American Hollywood actress who came into the limelight for Tv appearances such as National Treasure (2004), How to Lose a Guy in 10 Days (2003), and One for the Money (2012).

Likewise, she was nominated for a Daytime Emmy Award for the television soap opera ‘As the World Turns’ in 2001.

In addition, she is the wife of an American Actor, Paul Sparks.

Likewise, she was born to her father, Louis G. Cancelmi, a senior executive with Alaska Airlines, and mother, Annette, a teacher. Her father is of mixed (Italian, Slovak, and Polish) descent snd her mother is of half-Italian and half-Lebanese-Syrian descent.

Annie has two brothers namely Louis Cancelmi, an actor, and Michael Cancelmi, an Italian teacher. She moved to New York City to pursue her career in acting at the tender age of 18. Annie was good at acting since her childhood and already started her career as an actress during her collegiate days.

She holds American citizenship and belongs to mixed (Italian, Polish, Slovak, and Syrian) descent. Moreover, she follows Christianity and her birth sign is Leo.

Annie enrolled at Mercer Island High School and then joined Fordham University where she majored in theater.

Having started her career with some lead roles in minor productions such as Medea and Antigone during her collegiate days. After that, she started with a minor role in the 2001 tv series Big Apple later she debuted from the Tv series ‘As the World Turns’ that aired in 1998 till 2003 followed by another movie ‘How to Lose a Guy in 10 Days’ in 2003.

After that, there is no looking backward and she has gained more than 45 acting credits to date. Some of her most notable appearances on television include What Just Happened in 2008, Fiction Crime Drama Tv Series Person of Interest in 20011-2016, and this was followed by another Crime Comedy Film One for the Money in 2012. She has also appeared on Monster-in-Law, Woman in Burka, First Person Singular, My Own Love Song, And So It Goes, Beverly Hills S.U.V., House of Cards, Friends from College, and The Looming Tower among others.

Furthermore, her latest movies are Paterno, The First, and Mrs. America.

There are no details of her salary but she has an estimated net worth of over $10M.

Talking about her awards and accolades, she has been nominated for a Daytime Emmy Award for the television soap opera ‘As the World Turns’ in 2001.

Annie stands tall at a height of 5 feet and 10 inches tall. She weighs over 57 kgs. Similarly, Parisse has dark brown eyes and hair of black color. She fits the shoe size of 9 (US).

Parisse is active on Twitter with over 1.7K followers.