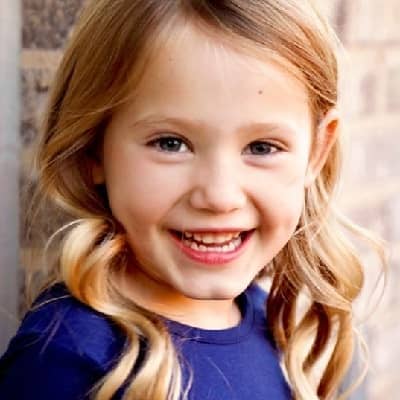 Anniston Price is too young to be in any kind of romantic relationship. As of now, she appears to be Single. She is currently enjoying her childhood days with her twin sister.

Who is Anniston Price?

Anniston Price is a child television actress. She rose to fame after appearing as Holly on the Netflix series, Stranger Things.

Anniston was born on August 4, 2012, in the United States. At present, she is 8 years old and her Sun sign is Leo. She holds an American nationality and belongs to Caucasian ethnicity.

The name of her parents is Nathan Price (father) and Kristen Price (mother). She has a twin sister named Tinsely Price. Also, she has an older brother name Brayden Price.

Moving towards her academics, she is at the school level but hasn’t yet revealed her school name in the media. In 2018, she graduated from Kindergarten.

Anniston steeped into the entertainment industry when she was 12 months old. She appeared in Season 4 of AMC’s The Walking Sead where she portrayed the role of Judith Grimes from episodes 1 to 10.

Anniston and her twin sister Tinsley both appeared as the character and have often switched playing the same role in series. In season 1 of Stranger Things, she was cast in the character of Holly Wheeler in an episode of The Vanishing of Will Byers.

She portrayed the character for over three years up to season 3 of Stranger Things. In their first season, the twin sisters were afraid of the character of Demogorgon. Similarly, Price has featured in an uncredited role in the 2016 film, The Divergent Series: Allegiant.

In 2018, she has appeared in three films such as Trial by Fire where she portrayed the role of  “Older Karmon”, “Young Tiffany” in Galveston, and “Sam’s Daughter” in Forever My Girl.

Price has a fresh career so as of now, she hasn’t been part of any sorts of rumors and disputes that hamper her uprising career. Also, she is currently busy developing her career.

As per other online sources, Price has an estimated combined net worth of around $1.5 million along with her sister throughout their profession as an actress. Further, their salary and other assets are still under review.

Anniston is a pretty girl who stands at the height of 4 feet 1 inch tall. She has blonde hair with hazel blue pair of eyes. Further, there are no details available regarding her other body measurement.