Skip to content
Married Biography
Married Biography / Entertainment / Another statement of Kellyanne Conway drags her to headlines. She says Trump 'doesn't know' former advisers who are under investigation for Russian ties

Updated On October 12, 2022 | Published By: Frances West | In Career , Lifestyle
Share this 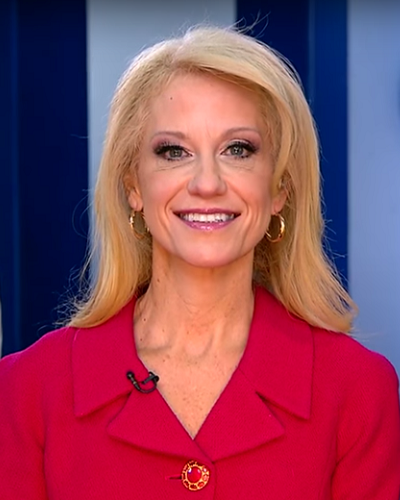 Another statement of Kellyanne Conway regarding Donald Trump

Kellyanne Conway previously became the matter to talk about when she gave a suggestion which was more surveillance. Click to know the full story

Her current statement is more like that she is trying to maintain the distance between Trump and his two advisors who were reported to be under investigation for their alleged ties to Russia.

“I have spoken directly to the president and other senior officials about this.”

“He doesn’t know these gentlemen. He didn’t work with them.”

More about the news from other sources

According to the source, the FBI and two intelligence agencies concluded in January that Russia sought to undermine the November election.

Believing the report, Page and Gordon are constantly the targets of investigation including the former whisperer Roger Stone.

‘In the case of Mr. Page, Mr. Gordon, some others, they really have very attenuated contacts to the campaign that I managed for the last three months’

Although she didn’t mention the name of Stone she also didn’t make the point clear that is still President in contact with Roger Stone. Stone personally confirmed that he had exchanged messages during the campaign with a hacker known as ‘Guccifer 2.0’ – who is believed to be a front for Russian intelligence.

This is not the first time when Conway has defeated Trump’s family. Previously also she had supported Ivanka Trump in her controversy. Know the full story here…

Kellyanne Conway is a political activist who is currently working as a Counselor to President Donald Trump, the president of the U.S.A. She has also been a Republican Party campaign manager, strategist, and pollster. Kellyanne was also the former president and CEO of The Polling Company Inc./Woman Trend.

Conway, a veteran political operative, has spent the last three decades advising Republicans on how to appeal to female voters. Also, she was already doing this for the Trump campaign before he represents her to be his campaign manager. On Dec. 22, 2016, Conway was named counselor to the president. – See more bio…