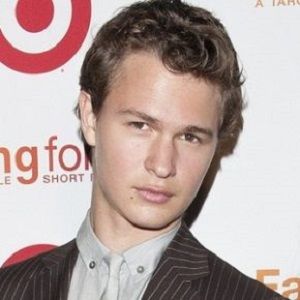 I had a birthday party with my family and friends at a house, and Chipotle catered. It was beautiful

Some nightlife places, people aren't there for the music, and it's depressing. I'm not just a club DJ

I am a producer, and I'll only DJ when the crowd is there to enjoy the music

I don't want anyone part of my love life besides me and the person I'm loving.

Ansel Elgort is an unmarried man till now. He is currently in a relationship with Violetta Komyshan. He began dating his high school sweetheart, Violetta Komyshan in 2012. The couple broke up in August 2014 primarily due to the actor’s burgeoning career and hectic schedule, but the couple later patched-up in January 2015. Since then, the couple is living happily together.

Who is Ansel Elgort?

Ansel Elgort is an American actor and singer. As a film actor, he is best known for playing Tommy Ross in Carrie, and Augustus Waters in The Fault in Our Stars (2014). He also played Caleb Prior in the Divergent film series. Under the name Ansølo, he created a SoundCloud account to publish electronic dance music and remixed songs.

Ansel Elgort was born on 14 March 1994, in New York City, New York, USA. Ansel is an American by nationality and he is of Polish, Ashkenazi Jewish, German, English, and Norwegian ethnicity.

His parents are Arthur Elgort, a fashion photographer for Vogue, and Grethe Barrett Holby, an opera director. His father is of Russian Jewish descent, and his mother is of Norwegian, English, and German ancestry. He has two older siblings named Warren, a film editor, and Sophie, a photographer.

At the age of nine, his mother took him to try out for the School of American Ballet. He attended The Professional Performing Arts School and  Fiorello H. LaGuardia High School. He also attended the Stagedoor Manor summer camp. Elgort started taking acting classes at the age of twelve and starred in his high school’s productions of Guys and Dolls, and the play Hairspray.

Ansel began his acting career playing the character Tommy Ross in the 2013 film Carrie. His first highly publicized role was in Divergent as Caleb Prior in 2014. After that, he played Augustus Waters in the film adaptation of John Green’s novel The Fault in Our Stars that same year. He also reprised his role as Caleb Prior in The Divergent Series: Insurgent in 2015 and in The Divergent Series: Allegiant in 2016. Elgort was named one of the best actors under twenty years of age in 2015. His films November Criminals and Billionaire Boys Club are under post-production.

Under the name Ansølo, Elgort created a SoundCloud account to publish electronic dance music, and he has remixed songs in early 2014. In February 2014, he signed a record deal with Tom Staar’s new label Staar Traxx and Steve Angello Size Records. His first record “Unite” was released on April 21, 2014. His second record, “Totem” was released on July 21, 2014. In 2015, he signed a record deal with Island/Universal Records. He released his first single titled “Home Alone” in July 2016. In February 2017, he released a single titled “Thief” under the name Ansel Elgort.

Ansel Elgort: Salary and Net Worth

He has accumulated a net worth of 2 million dollars. But there is no information regarding his salary.

Elgort has received significant media attention for controversial statements made regarding women. He is politically liberal and has publicly denounced President Donald Trump several times. Currently, there are no desperate rumors regarding his personal and professional life.

He has a good height of 6 feet 4 inches(193 cm) with a bodyweight of 79kg. His chest size is 38 inches, his waist size is 32 inches and his biceps size is 13 inches. His hair color is dark brown and his eye color is light brown.

Ansel Elgort wants to fall in love with more people other than his girlfriend: “It doesn’t need to be sexual”

Having family members from the industry, Ansel Elgort has successfully developed himself as an American actor. And also a singer with his own songs!