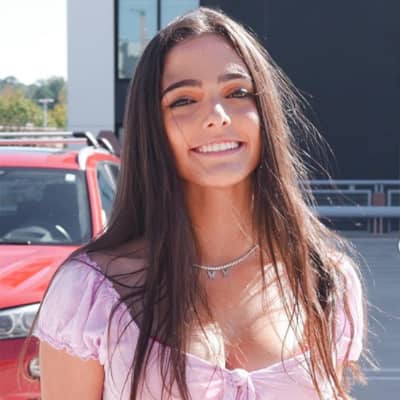 Ansley has never shared anything officially regarding her relationship status. And the star is also not seen dating anyone in the past.

Who is Ansley Spinks?

Ansley was born on January 31, 2004, in Atlanta, Georgia, the United States. Her full name is Ansley Jane Spinks and her ancestry is Anglo-Saxon.

The names of her parents are not revealed yet. She has a sister named Scarlett and als9 has featured her in the videos with her. Likely, Ansley has three step-siblings: Rowan, Anna, and Joey.

She finished her high school education at Eastside Christian School. And she may be now attending her bachelor’s degree.

Ansley is a popular content creator and is well known for her videos that she posted on her TikTok account, ansleyspinks. She also belongs to the Tik Tok Star club at PopSlider.

Her duet video featuring Alex French is also one of her popular videos on TikTok. She is friends with various fellow Tiktokers like Jackson Dean, Caroline, Mandy, and others. And they often made videos together.

Ansley is represented by Vivid Management. In a short span, Ansley has gained popularity and amassed 1.4M fans in her account. She has also extended her internet career into other platforms.

Ansley earns from her internet career, promotional posts, and various streams. And likely she has amassed a net worth of around $100,000.

Similarly taking about her appearances, she has dark brown colored hair with hazel eyes.

Likely, her official Tik Tok account also holds 1.5M followers and 50M likes. Similarly, she has her own YouTube channel with 717 subscribers.