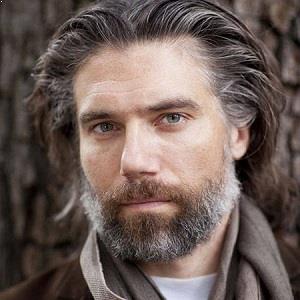 I'm an enemy of exposition. I feel there's no need to overstate.

In the last two or three decades, there's been a feminization of the man in popular media that I've never really understood.

It's really rare that you come across a Southern character that's not stereotyped, vilified or aggrandized.

I grew up hunting with shotguns and rifles, and we had a gun in every corner of the living room. I'm not a gun advocate, but that's the way I grew up.

Anson Mount was previously in a relationship with Wen Yi. Additionally, he also dated  Dominique McElligott for a brief amount of time. He also dated  Famke Janssen in the past.

At present, Mount is in a relationship with Darah Trang. The pair got engaged in July 2017. Then on 20 Feb 2018, this couple exchanged vows with each other.

Who is Anson Mount?

Anson Mount is an American actor. He portrayed the fictional character, Cullen Bohannon, in the AMC western drama series ‘Hell on Wheels’.

Additionally, he was also cast in the role of Jim Steele on the short-lived NBC series ‘Conviction’ and appeared in the film ‘Tully’.

Mount was born in Mount Prospect, Illinois on February 25, 1973, to mother Nancy Smith, a former professional golfer and father, Anson Adams Mount II, one of the original contributing editors to Playboy magazine.

Additionally, he has an older brother, Anson Adams III, and two sisters, Kristin and Elizabeth, from his father’s first marriage. He became interested in the world of show business since his early childhood years.

He is of American nationality. Furthermore, he has not revealed information regarding his ethnic background at present.

Talking about his education, Mount attended  Dickson County High School in Dickson, Tennessee, The University of the South, and Columbia University.

Anson Mount initially appeared as Kevin Wah on the TV series ‘Ally McBeal’ in 1999. Next, he portrayed the role of Greg in ‘Sex and the City’. Since then, he has appeared in numerous movies and television series. All in all, he has more than 40 credits as an actor.

Some other movies and television series that Mount has appeared in are ‘Inhumans’, ‘Hell on Wheels’, ‘Mr. Right’, ‘Visions’, ‘The Forger’, ‘Supremacy’, ‘Non-Stop’, ‘Red Widow’, ‘Seal Team Six: The Raid on Osama Bin Laden’, ‘Safe’, ‘Straw Dogs’, ‘Hick’, ‘Last Night’, ‘Burning Palms’, ‘Dollhouse’, ‘The Two Mr. Kissels’ and ‘The Cure’ among others. Additionally, he also has 4 credits as a producer and 1 credit as a director.

Mount garnered the Teen Choice Award nomination in 2002 for ‘Crossroads’ in the category of Film – Choice Chemistry.

Mount has not revealed his current salary. However, he has an estimated net worth of around $3 million.

Mount indirectly became part of a controversy after he appeared as a crucified modern-day messiah on Terrence McNally’s controversial play Corpus Christi’.

Apart from this, Anson has not been part of any other notable controversies. Furthermore, there are no rumors concerning Mount and his career.

Talking about his body measurement, Anson Mount has a height of 6 feet 1 inch or 183 cm. Additionally, he weighs around 87 kg or 192 lbs. Furthermore, his hair color is dark brown and his eye color is blue.

Anson Mount is active over social media. He has a huge number of followers on social networking sites such as Facebook, Twitter as well as Instagram.