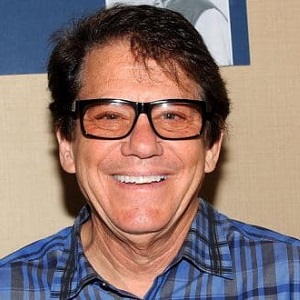 “I missed that question on Alaska. I hear they want to make it a state now.”

What is the relationship of Anson Williams?

Anson Williams was previously married to Lorrie Mahaffey on November 19, 1978, and they welcomed one child.

But, they could not hold the relationship and end with divorce in 1986. Later, he married Jackie Gerken in 1988.

They together welcomed 4 children. One of his daughter’s names is Hannah Lily. They are living together happily.

Who is Anson Williams?

Anson Williams is an American actor, singer, and director and he is best known for her role as gullible, and for his singing as Warren “Potsie” Weber on the television series ‘Happy Days’.

In 9183, he was nominated for the Golden Globe Award for Best Supporting Actor-Series, Miniseries or Television Film.

He was born on September 25, 1949, in Los Angeles, California, US. He is born as Anson William Heimlich and he is given nickname as Potsie. Anson is currently 69 years old.

His father’s name is Haskell Heimlich, and he changed the spelling of the family name to ‘Hemilick’.

He holds American citizenship but his ethnicity is unknown. He has not mentioned his mother, siblings and about his childhood.

He attended Burbank High School and became captain of the track team and acted in multiple school productions.

He made his appearance with John Amos in a commercial McDonald’s in 1971. He portrayed the role of Postie Weber in a segment of the comedy-anthology series ‘Love, American Style’ titled ‘Love and the Happy Days’.

Anson made his appearance less frequent in later seasons of ‘Happy Days’ but he was one of the few to remain through the entire run of the series.

Richie, Potsie, and Ralph formed a band combo that performed at Arnold’s Drive-In and other places in some episodes. He was the lead vocalist for the group.

Anson made his appearance in a 1996 ‘Happy Days’ themed ‘Boy Meets World’ and appeared as Potsie in a fantasy sequence of ‘Sabrina the Teenage Witch’.

He is also a businessman. He along with Al Molinaro opened a chain of diners called Big Al’s but the business did not go well. Later, he founded Starmaker Products which was a cosmetic company.

In April 2008, he featured as a speaker at the U.S. Patent and Trademark Office’s National Trademark Expo. His books include ‘Singing to a Bulldog: From Happy Days to Hollywood Director, and the ‘Unlikely Mentor Who Got Me There’.

He was nominated for the Golden Globes, the USA in the category ‘Best Performance by an Actor in a Supporting Role in a Series, Miniseries or Motion Picture Made for Television’ in ‘Happy Days’ in 1983.

As of 2022, He has an estimated net worth of around $1.8 million and his main source of income is from his professional career.

Anson Williams along with four of her ‘Happy Days’ co-stars filed a $10 million breach-of-contract against CBS on April 19, 2011.

They were supposed to be 5% from the net proceeds of merchandising if their sole images were used and 50% if they were in a group. They claimed they owed millions but CBS told them they only owed the actors $8,500 and $9,000 each.

But, the judge rejected the group’s fraud claim in October 2011 and denied a motion filed by CBS to have the case thrown out on June 5, 2012, and it would go to trial on July 17.

Finally, the actors settled their lawsuit in July 2012 with CBS. Each received a payment of $65,000 also CBS made a promise to continue honoring the terms of their contracts.

He has got dark brown hair and light brown eyes.

He doesn’t seem to be active on social media. It seems he likes to keep his profile low.