Ant Anstead is an English television presenter, motor specialist, car builder, designer, and artist. He is best known for co-presenting the Channel 4 automotive show For the Love of Cars.

Ant Anstead was a married person. He had been married to American television personality Christina El Moussa since December 22, 2018. They began dating in November 2017 but made it official in 2018.

The marriage ceremony was held in a secret ‘winter wonderland’ wedding at their home in California. They also welcomed their son named Hudson London Anstead in 2019.

However, recently in late Sep 2020, he and his wife announced their split. Christina also deleted all her wedding pictures from her social media account.

However, the couple could not hold the relationship and separated in 2017. 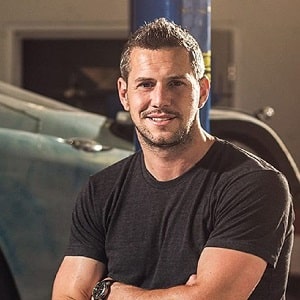 I’m incredibly grateful to have met her. She saved me.

Who is Ant Anstead?

Ant Anstead is an English television presenter, car builder, designer, motor specialist, and artist. He is best known for hosting the English Channel 4 automotive show ‘For the Love of Cars’.

He was born on March 28, 1979, in Plymouth, Devon, England as Anthony Richard Anstead. The names of his father and mother are unrevealed.

Until the age of ten, he lived in Ely Cambridgeshire and then, moved to Hertfordshire with his family. He has got three brothers and he is the second son of his parents.

Ant holds British citizenship but his ethnicity is Caucasian.

He did his schooling at Richard Hale School, Hertford. After that, he attended Haileybury School and completed his A-levels.

Ant Anstead served as a Police Constable t Bishop’s Stortford after he joined Hertfordshire Constabulary in 1999. After that, he moved to Cheshunt police station and became one of the youngest armed officers in the UK.  But, he resigned from Police in 2005, in order to pursue his carer as a car builder.

The ant started building and restoring cars for clients and built recreation cars. Also, his unique piece of art and many of his works are housed globally in museums and private collections.

Then, he began his own TV Production Company by producing his show ‘The World’s Most Expensive Cars’ in 2017, and in the same year, he was approached to host a new Channel 4 car show along with the English actor Philip Glenister.

After that, he hosted the BBC’s Two’s live show ‘Building Cars Live’ with Kate Humble and James May in 2015 and took over from Edd China as host of the car show, Wheeler Dealers in 2017.

He was awarded two commendations for acts of bravery during his police career.

As of 2022, he has an estimated net worth of around $6 million and he has earned that sum of money from his professional career.

However, his salary and net worth are under review.

It seems the actor has not been involved in any kind of rumors and controversies in his career.

Ant Anstead has a height of 6 ft. 2 inches and he weighs 81 kg. He has green eyes and gray hair. After his divorce, he has lost about 23 pounds.

To know more about Edd China, Fearne Cotton, and Simon Cowell, please click on the link.