Updated On October 12, 2022 | Published By: Selina shamp | In Divorce , Married , Wedding
Share this 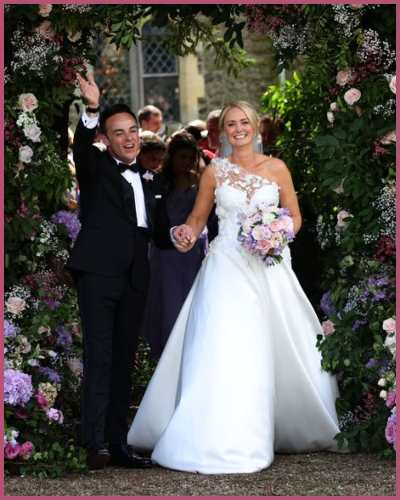 Britain’s Got Talent presenter McPartlin celebrated his first wedding anniversary with his wife Anne-Marie on August 7, 2022. The couple had a star-studded wedding in the UK amidst a pandemic.

The ex-husband of Lisa Armstrong married his Ant McPartlin after 3 years of relationship. Having sparked romance in 2018, McPartlin only exchanged the vows a year ago.

McPartlin was impressed by how she stood by his side for the 2018 drink-driving arrest and a stint in rehab. Now he is paying tribute to his wife who was there in his hard times ever since she walked in.

Ant McPartlin honored his wife with the unseen wedding photos from his joint Instagram account with co-host Declan Donnelly, 46 saying,

In the wedding photos, Ant was wearing a classic black tuxedo while his bride donned a Suzanne Neville wedding gown. It was designed with a lace floral bodice and a flowing satin skirt added with floor length veil.

There were several congratulations and happy anniversary messages one of which being,

Also, Read Now That’s a Wedding Dress! Find Out More About the Designer Who Dressed Teresa Giudice for Her Wedding!

The makeup artist Lisa Armstrong who wedded TV veteran ex-husband Ant McPartlin in July 2006 split in 2017. Their 23 years of togetherness and 11 years of marriage ended at a cost of 40,000 pounds in January 2020 divorce settlement.

The two exes who met in 1994 were engaged in Dubai in 2005. However, they had no kids due to Lisa’s complications of conceiving. Lisa Armstrong shared the custody of her pet dog, Hurley, after their divorce.

Ant gave the £31m to his ex-wife as the alimony of the divorce settlement, including their £ 5 million former marital home in West London.

Also, Read Lisa Armstrong is going to celebrate her high-profile divorce from McPartlin with a bash costing £40,000!