Talking about his love life, Anthony Alabi is a married man. He is married to his wife, Caroline. Moreover, the couple has two beautiful children named Ande and Axton.

Presently, they reside with their two kids and their dog, Watson in Los Angeles. Anthony has not revealed his personal details and relationship things on the media and to the public till now. It seems he is private in nature and keeps his things away from media life. 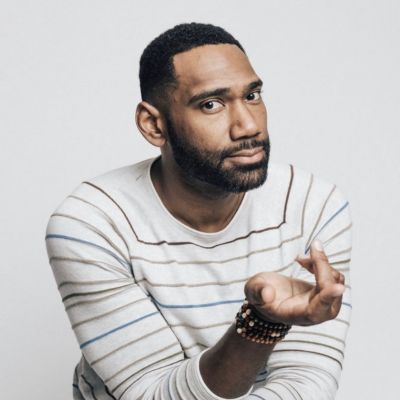 Who is Anthony Alabi?

Alabi is widely famed for portraying Moz McKellan in the Netflix comedy-drama series, Family Reunion, and as a Coach Spitz in the ongoing family sitcom TV show Raven’s Home.

Moreover, he has also featured in projects like Black-ish, Dimension, 404, Insecure, and so on.

Anthony Alabi was born on 16 February 1981. At present, his age is 40 years old. Likewise, his birthplace is San Antonio, Texas, the USA.

Anthony is the son of his father, Tony Alabi whereas his mother is Edna Alabi.

Talking about his nationality, Alabi holds an American identity whereas his ethnicity is Nigerian-Puerto Rican.

Regarding education, the star earned a BS degree in criminal justice with a minor in business at Texas Christian.

Later, he completed his Master’s in Liberal Arts with a criminology focus. Earlier he attended Antonian College Preparatory High School in San Antonio.

In the beginning, Anthony played for Antonian College Preparatory High School. He was a four-year letterman in football.

He was a two-time state champion in track and was inducted into the 2013-14 Antonian Athletics Hall of Fame class. Later, he played for Texas Christian University starting his final three seasons and making 35 career starts in college.

In his senior season, the offense averaged 32.9 points per game. Alabi also earned first-team All-Conference USA accolades each of his final two years. The star was drafted by the Miami Dolphins in the fifth round of the 2005 NFL Draft by former head coach Nick Saban.

He emerged his first regular-season action in 2006, playing in six games during the year. He made his NFL debut in a reserve role on 1 October.

The actor then quit the NFL in 2009 to pursue a career in acting. He portrayed the lead role in Family Reunion, a Netflix original series.

Moreover, he was also featured in Raven’s Home and Bosch and guest-starred in Malibu Rescue, Shameless, Insecure, and so on.

Alabi is also a writer and has written some comedy and drama scripts. He has produced many comedic digital sketches under the banner, Mudda Sucka.

A talented American multi-star, Alabi has earned a handsome amount of money from his multiple profession. He earns from the acting industry and the sports world as well.

It is reported that Anthony Alabi has an estimated net worth of $5 million as of 2022.

Anthony has never been part of any controversial matter or rumors till now. The former star has been preoccupied with his professional and private life.

It seems that Alabi prefers enjoying his personal life and does not want to merge it with his professional life.

40 years old star, Anthony has handsome looks and an admirable personality. He stands at a height of 6 feet 5 inches. Also, he has a balanced body weight of 143 kg.

Furthermore, Alabi has black eyes whereas his hair is also black.

Nevertheless, the former NFL star has never mentioned other physical details in the public yet.

Regarding his social media presence, Anthony Alabi is an active personality on social media. Anthony has more than 75.5k followers on his official Instagram account @anthonyalabiofficial.

He is also active on Twitter with around 1.1k followers.

However, Alabi is not available on Facebook at the moment.