Anthony Duclair is an ice hockey player who plays for the Arizona Coyotes of the National Hockey League. 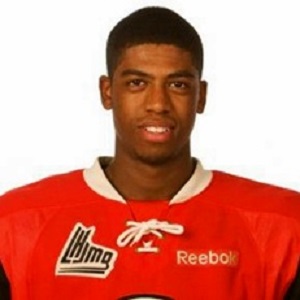 There is no any record of his relationship. It seems like he is focusing on his career and he doesn’t have time for love affairs.

Still, he has a huge fan following. He got a wedding proposal from the 4-year-old girl named Gracie Hernandez.

Gracie is a big fan of Anthony and she wrote a letter to her favorite player. According to the records, he is possibly single.

Who is Anthony Duclair?

Anthony Duclair is a young Canadian ice hockey player who currently plays for the Arizona Coyotes of the National Hockey League (NHL).

He was selected in the third round of the 2013 NHL Entry Draft by the New York Rangers.

In 2012, he won a gold medal representing Canada at the Ivan Hlinka Memorial Tournament.

Anthony was born on August 26, 1995, in Montreal, Quebec, Canada. His nationality is Canadian and he is of Haitian ethnicity.

He is the son of Haitian parents, Wendell Duclair and Dominique Raphael.

He grew up in Pointe-Claire, Montreal, Quebec with his family. His uncle Farell Duclair played in the Canadian Football League.

Anthony began his professional ice hockey career playing for the Lac St-Louis Lions in the Hockey Quebec league in 2010-11.

He signed with the Quebec Remparts of the Quebec Major Junior Hockey League (QMJHL) in 2012. He scored an impressive 50 goals in 59 games during the 2013–14 QMJHL season.

In 2012, he won a gold medal representing Canada at the Ivan Hlinka Memorial Tournament.

He was rewarded for his outstanding play being named to the QMJHL First All-Star Team. He spent three seasons with the Quebec Remparts and signed a three-year entry-level contract with the New York Rangers on January 2, 2014. He impressed the Rangers with his performance in the 2014–15 pre-season, leading the team with 5 points in 5 games.

He was named a Quebec Major Junior Hockey League First Team All-Star for the 2013-14 season while playing with the Quebec Remparts. He was traded to the Arizona Coyotes along with John Moore and two draft picks in March 2015.

He scored his first career NHL hat trick in a 4-0 shutout against the Anaheim Ducks on October 14, 2015.

He won the IIHF World U20 Championships Gold Medal in 2015. In January 2017, Duclair was demoted to the team’s AHL farm team, the Tucson Roadrunners due to a lack of production.

He returned to the Coyotes in March 2017.

Anthony Duclair: Salary and Net Worth

He currently has an annual salary of 742,500 dollars, but his net worth has not been revealed yet.

Anthony Duclair has a height of 5 feet 11 inches. His body weighs 84 kg. He has black hair and dark brown eyes.