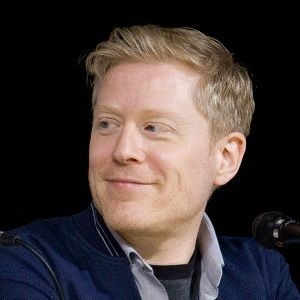 There is only one you for all time. Fearlessly be yourself.

Frankly, if people aren't going to cast me because I'm queer, than I don't want to work with them.

Acting is like going to the gym. You have to keep yourself in shape and concentrate on your core.

Anthony Rapp is currently single. Although he has had some male and female partners in the past, none of those were serious enough to turn them into marriage.

Since he has kept his personal life in shades, it is hard to tell about his current personal status. Furthermore, there are not any rumors about his relationship as of now. And he doesn’t seem to be interested in sharing his personal matter with us.

Who is Anthony Rapp?

Anthony Rapp is an American actor and singer. He is widely famous for his performance in the Rent, You’re a Good Man, Charlie Brown, and A Beautiful Mind. Currently, he can be seen as Lieutenant Paul Stamets in Star Trek: Discovery.

Anthony Deane Rapp was born on October 26, 1971. The couple Douglas Rapp and Mary Lee Baird gave birth to Anthony in Joliet, Illinois, U.S. And, his mother was a nurse. He also has a brother Adam Rapp and a sister Anne Rapp. Furthermore, his brother Adam is a novelist and a filmmaker.

Talking about Anthony’s childhood, he was raised by her mother alone after his parents got divorced. He was very passionate about singing since his childhood. So, he was very active in the activity regarding singing even in his school. As a child, he chose his career as a singer but the decision of acting only came later.

As regards Anthony’s academic qualifications, he attended New York University. In addition, he was a student of Joliet West High School.

Anthony was already starting his acting career in a theater when he was a child. However, his first television appearance came on 1987 in Adventures in Baby Sitting. Following his debut, he has made many television and movie appearances.

Staring in numerous television series, Anthony has grasped a well-deserved fame all around the world. Some of his good works can be found in The Lazarus Msn, The X-Files, Law & Order, Psych, and The Good Fight. His most recent work in Star Trek: Discovery in 2017 as Lieutenant Paul Stamets has given him more fame.

In addition, he has had a successful film career. The movies Adventures in Baby Sitting, Dazed and Confused, Man of the Century, A Beautiful Mind, Black Bird, Rent and Not Again are some of his fame deserving movies. And his theatre works are also equally impressive. Among his many theatre appearances, his performance in If/Then and Rent is highly talked about.

As the part of his singing career, he released his debut album Look Around in 2000. Furthermore, he has done a number of concerts across in New York Town Hall, Emelin Theatre, and several others. And in 2015, he did a concert with Adam Pascal in B.B King Blues Club and Grill.

Anthony has numerous awards under his name during his successful professional career.

He received Outer Critics Circle Award and Drama Desk Award in 1986 under the category of Outstanding Actor in Musical. Furthermore, he has Obie Award and 2014 Broadway.com Audience Award under his name.

Anthony Rapp: Salary and Net Worth

As the result, if his successful professional career, he has been able to gather a huge amount of wealth under his name. And, his net worth is about $2 million.

Recently Anthony came into light after he claimed that Kevin Spacey made a sexual advance towards Anthony when he was in his childhood. This became a hugely controversial topic. This nearly ended Kevin’s contract with House of Cards. However, Kevin apologized for his mistake and the matter is settled.

Anthony Rapp is 5 feet 8 inches tall, gentleman. Also, he weighs 65 Kg. And, he has blonde hair and gray eyes. However, many other details regarding his body measurement are currently missing.