Anthony Rendon is happily married to his spouse Amanda Rodriguez. They got married on November 25, 2017. The love birds dated for several years before tying the knot. They were often seen together. 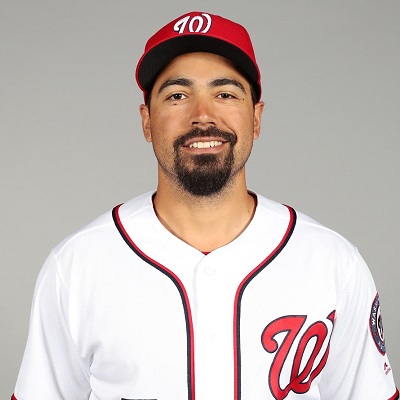 “I have faith in God. I was told to be humble before him. Don't boast about what you have done. Don't put credit in your own hands. You have to realize He got you there''

“They labeled me a Christian rapper, but all I know is I want to be more Christian than rapper.”

“I want to be known as a Christian baseball player. I’m still trying to grow into that, but in the end, I want to be more Christian than a baseball player. I was thinking about what he had said and I think if I start saying the word, and surround myself with good people and good community, then I think that would guide me on that path.”

Who is Anthony Rendon?

Anthony Rendon is an American baseball player. He currently plays as third baseman for the Washington Nationals of Major League Baseball (MLB).

He won the 2010 Dick Howser Trophy while playing baseball at Rice University. He made his MLB debut in 2013.

Anthony Rendon was born as Anthony Michael Rendon on  June 6, 1990, in Richmond, Texas. He was born to his father, Rene, and his mother, Bridget Rendon. He grew up on the Southwest side of Houston.

At an early age, he showed his interest in baseball. He was a star basketball player, track athlete, and baseball player at Hodges Bend Middle School. Then he attended George Bush High School for two and a half years but transferred to Lamar High School later.

After the completion of Anthony Rendon’s high school,  the Major League Baseball team Atlanta Braves offered him a draft. He turned down the offer and decided to join Rice University to play for the head coach Wayne Graham.

Anthony Rendon was also nominated for both the Dick Howser Trophy and the Golden Spikes Award in his first season at the college level.

As a true freshman, he hit .388 with 20 home runs and 72 runs batted in, starting in all 61 of the Owls’ games. He led the conference in numerous offensive categories, including batting average, slugging percentage, and home runs, setting a new Rice freshmen record at 20.

In Rice’s last game, in the Baton Rouge Super Regional, Rendon suffered from an ankle injury and got surgery.

Anthony Rendon in the 2010 season

He was the winner of the Dick Howser Trophy and was Baseball America’s College Player of the Year, becoming the first underclassman in a decade to win the award.  He was named:

After his Rice season ended, Rendon went to represent his country playing on the international circuit for Team USA. Unfortunately, he suffered from another right ankle injury in the first game against South Korea.

The Washington Nationals selected him in the 2011 Major League Baseball draft.

In the 2013 season, Rendon mostly played as second base. He finished the season with the Nationals, putting up a .265/.329/.396 triple slash with seven home runs across 98 games with the major league club.

In the 2014 season, he moved back to his original position as the third baseman. He led the National League in runs scored with 111 runs putting up a .287/.351/.473 slash line, hitting 21 home runs and stealing 17 bases over the course of the season. He was even placed fifth in National League Most Valuable Player voting and won Silver Slugger Awards for his performance.

Rendon had a rough start in 2015 as he sprained the medial collateral ligament in his left knee.

In the 2016 season, he returned to form in the batting line and hit .270/.348/.450 with 20 home runs. He played exclusively as the third baseman and appeared in most of the regular-season games, missing only six games. He got the title of the National League Comeback Player of the Year.

In the 2017 season, Rendon led all National League position players in wins during the first half of the season. But he didn’t get to participate in the All-Star Game. He became the Player of the week in the National League on July 17, 2017. In this season he batted .301/.403/.533 with 25 home runs.

Net Worth of Anthony Rendon

According to some internet sources, his net worth is around $17.6 million. He has signed a $12.3 million contract in 2018 to extend his stay with the Nationals.

You may also know about the net worth, body measurements, the early life of Trevor Hoffman, Gerrit Cole, Javier Lopez.