Anthony Rizzo is an American professional baseball player. He is an unmarried player.

Anthony Rizzo is an unmarried player till now. He is currently in a relationship with Emily Vakos. The couple has been together for a long time now and in June 2017, they were engaged.

The newly engaged couple is having a great time together and soon they might get married. He hasn’t revealed any plans for marriage till now. 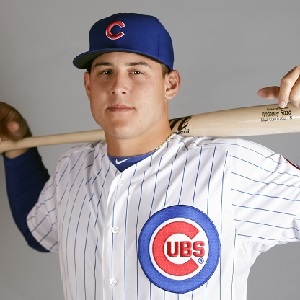 Every day there is something new you are working on. It is a challenge every day and that is what makes this game so great

One game, one pitch can change everything for a hitter. The way I like to approach it is that every at-bat is its own unique opportunity to go out there and do something really good

I don't believe a player is ever a finished product.

Who is Anthony Rizzo?

Anthony Rizzo is an American professional baseball player. He currently plays as a first baseman for the Chicago Cubs of Major League Baseball (MLB). He was selected by the Boston Red Sox in the sixth round of the 2007 MLB draft and became a top minor league prospect in the Red Sox organization.

Anthony Rizzo was born on August 8, 1989, in Fort Lauderdale, Florida, USA. He is the son of Laurie Rizzo and John Rizzo. He has an older brother named John Rizzo, who was a lineman for the Florida Atlantic University football team. Rizzo was diagnosed with limited state classical Hodgkin’s lymphoma in April 2008.

He went through chemotherapy for six months. His nationality is American and he is of Italian, English, Polish, and Irish ethnicity. Anthony attended Marjory Stoneman Douglas High School in 2007.

Rizzo began his baseball career at Marjory Stoneman Douglas High School as a sixth-round draft pick by the Boston Red Sox in 2007. He played in the Red Sox Organization with the Gulf Coast League Red Sox, Greenville Drive, Salem Red Sox, and the Portland Sea Dogs.

On December 6, 2010, Rizzo was traded along with Casey Kelly, Reymond Fuentes, and Eric Patterson to San Diego Padres. On January 6, 2012, Padres traded him to the Chicago Cubs. He started the 2012 season with the Triple-A Iowa Cubs. He again excelled in the minor leagues.

Rizzo became the first player in Chicago Cubs history to have three game-winning RBIs in his first five games with the team. On May 12, 2013, he agreed to a 7-year, $41 million deal with the club. Anthony made his first All-Star team in 2014.

In 2016, he helped lead the Cubs to the franchise’s first World Series title in over 100 years. He started as the first baseman at the 2016 All-Star game and received the most fan votes in the National League. He also played for Italy in the 2013 World Baseball Classic. His annual salary is 5 million and he has a net worth of 27 million dollars as of 2022.

He has a height of 6 feet 3 inches with a body weight of 109 kg. He has light brown hair color and his eye color is brown.

Also get to know more about the birth facts, education, career, net worth, rumors, height, and social media of different personalities like Dylan Bundy (Baseball), Matt Franco, and Javier Lopez.