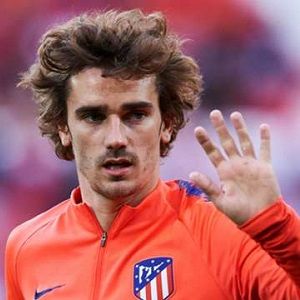 Antoine Griezmann is a married man. He has been in a relationship with Erika Choperena since 2011. They married on 15th June 2017. On 8th April 2016, they had their first child Mia. Similarly, he had a second child Amaro on 8th April 2019. He was named after the name of Antoine’s grandfather Amaro Lopes.

Likewise, there is no news of their divorce and they are living happily together.

Who is Antoine Griezmann?

The popular French professional footballer Antoine Griezmann plays as a forward for Atlético Madrid and the French national team. He plays for Atletico Madrid currently and he had played for Real Sociedad. Similarly, he is famous for representing himself in Russia for the World Cup 2018 as a part of the national team by showing his talent to all.

He was born on 21st March 1991 in Macon, France. He is the son of Alain Griezmann and Isabelle Griezmann. Similarly, he has a sister Maud Griezmann and a brother Theo Griezmann.

Likewise, he belongs to French nationality and his ethnicity is Alsatian German and Portuguese.

Talking about his education, there is no information about the school, college, and university he went to.

He began his senior career as a member of Spanish side Real Sociedad in the year 2009, with whom he won the Segunda División title in his first season. Similarly, he departed five seasons later to join Atlético Madrid for a then-club record €30 million. Although featuring mostly as a winger during his time with Sociedad, he adapted his game in Madrid. He became a complete forward and quickly became the focal point of the team.

Similarly, he would go on to break the club’s scoring record for a debut season and was named in the year 2014–15 La Liga Team of the Season. Likewise, he is also a former French youth international, representing his country at under-19, under-20 and under-21 level. He was part of the team that won the 2010 UEFA European Under-19 Championship on home soil.

He earned his first cap for the senior national team in 2014, and played at that year’s World Cup, helping his country to the quarter-finals. Likewise, at UEFA Euro 2016, France finished runners-up as hosts. He was the top goalscorer and was voted the Player of the Tournament.

Likewise, he featured in EA Sports’ FIFA video game series: he appears on the cover of the French edition of FIFA 16 alongside global cover star Lionel Messi, having been selected for the role by public vote.

Similarly, Antoine Griezmann won the 2018 FIFA World Cup and a tournament in which he scored four goals. He earned him the Silver Boot as the second highest goalscorer of the tournament. Further, he won the Bronze Ball as the third best player and was named man of the match in the final.

He has the estimated net worth of $21 million. Similarly, he receives an annual salary of $12 million. He has a weekly salary of £200,000. Likewise, he is the highest paid player in Atletico Madrid. He owns a car like BMW, Bentley and McLaren P1. Recently, he bought a deluxe house which costs around $2.1 million.

There is a rumor of Antoine leaving Atletico Madrid and his transfer destination to be Barcelona. Further, there is no other rumors and controversy of Antoine.

Antoine Griezmann has a height of 5 feet 9 inches and his weight is almost 69 kg. Similarly, his hair color is light brown and he has blue color eyes.