Antonella Roccuzzo is a model who is famous as Lionel Messi's wife. Antonella and Messi have three kids.

Beautiful and stunning Antonella married to her childhood sweetheart Lionel Messi. Antonella and Messi were in a relationship for almost nine years, since 2008.

They turned their long sweet relation into marriage back on June 30, 2017. The couple has welcomed three sons Thiago Messi(born 2012), Mateo Messi(born 2015), and Ciro Messi Roccuzzo(born 2018).

Moreover, she has also been in a relationship with another boy for a while when Messi went to Spain. But she terminated the relationship in 2010 and went for Messi. 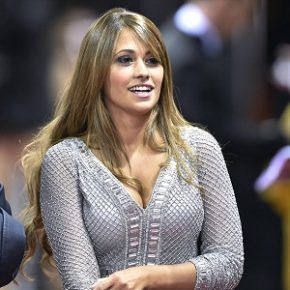 Who is Antonella Roccuzzo?

Antonella Roccuzzo is an Argentinian model by profession. Antonella is famous for being the wife of the football ace Lionel Messi.

Apart from that, she has always become a media sensation because of her beautiful pictures on social media with her husband. Currently, she is about to run her footwear brand.

Antonella Roccuzzo was born to Jose Roccuzzo and Patricia Blanko on 26th February 1988 in Rosario, Argentina. Her father is a businessman and her mother is a homemaker. She has two sisters, Paula and Carla Roccuzzo. Moreover, she belongs to Italian ancestry.

She spent her childhood in her hometown. Antonella and Messi were friends from their childhood. Antonella was shy as a child and she didn’t have many friends.

Regarding her education, Antonella completed her schooling at a local school in Rosario. After that, she enrolled in a university in Argentina to study odontology. Furthermore, she persuades social communications.

Initially, Antonella Rocuzzo wanted to become a dentist. Later she began to concentrate on modeling. Moreover, she has worked as a model for different products.

Antonella moved to Spain with Messi after he began his career in Barcelona. Currently, she is more focused on raising their two sons Thiago and Mateo. According to reports, she is now going to open a footwear production of her own alongside Luis Suarez’s wife Sofia Balbi.

All her earnings come from modeling as well as from other works. Being the wife of global football star Lionel Messi currently, she has an estimated net worth of $20 million as of the year 2022. However, her salary is unknown. She hasn’t won any awards yet.

Antonella has managed to take herself out of the controversy. In addition, she hasn’t been the topic of any rumors and controversy yet. Normally she is pretty focused on her own life and living her life peacefully with her husband and sons.

Antonella has a height of 5 ft 2 inches and weighs 54 kg. She has an attractive black eyes and beautiful black hair. Antonella’s waist size is 25 inches, bra size is 32C and hip size is 36 inches.

Also, read Lionel Messi Vs. Cristiano Ronaldo! Who is your favorite football player?