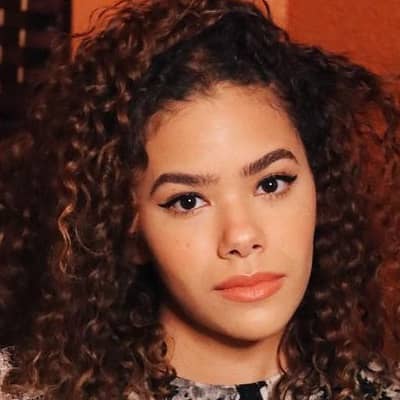 Antonia Gentry is currently in a relationship with Ezra Pounds. Ezra is an Atlanta-based composer, and producer.

The couple started dating in the year 2012. They are together since high school. Moreover, she keeps posting photos of her boyfriend Ezra on her social media handle  Instagram.

Who is Antonia Gentry?

Antonia Gentry is an American film and television actress. She rose to fame after appearing in the lead role of Netflix’s teen series “Ginny & Georgia” as Ginny.

The actress was born in Atlanta, Georgia, the U.S. on September 25, 1997. Antonia is an American citizen and is biracial as her mother is All-American and from Jamaica, whereas her father is of Caucasian descent.

She is the only child of her parents Tony Gentry (Father) and Sandra Gentry (Mother). She wanted to be an actress from an early age. Talking about her education, she attended the John S. Davidson Fine Arts Magnet School in Augusta, Georgia.

Antonia made her on-screen acting debut in the year 2015 through the film, Driver’s Ed: Tales from the street where she played the role of Sara. In the same year, she appeared in the short film, Lone Wolf Mason as Madison.

In 2018, she made an appearance in the Netflix film, Candy Jar where she played the role of Jasmine. The film features other cast members like Sami Gayle, Jacob Latimore, Christina Hendricks, Uzo Aduba, and more. A year after, she appeared in another television series, Raising Dion as Wendy.

Currently, she came into the limelight of the media after she gets a chance to act in one of the lead roles of the Netflix TV series, Ginny & Georgia. In the series, she played the character of Ginny Miller along with Brianne Howey, Jennifer Robertson, Felix Mallard, and other cast members.

In 2021, she nominated for her role as Ginny in the category of Best Breakthrough Performance at MTV Movies & TV Awards. However, the result of the awards is still pending.

Recently, Gentry faced controversy while her show, Ginny & Georgia made a joke about Tylor Swift in an episode of the show. The line ” What do you care? You go through men faster than Taylor Swift” was said by Gentry’s character Ginny to her mom, Georgia (Brianne Howey).

While Swift tweet against the show and called out the show for their “deeply sexist joke”. Similarly, her fanbase slammed the cast and crew on social media. Mainly, Swift’s fans attacked Gentry for the show’s Lame joke because Gentry’s character said that line.

As an actress, Antonia might have earned an impressive amount of wealth through her profession to date. Her net worth is estimated to be between $100,000-$300,000 according to the sources.

The actress has a well-maintain slim body with a brown complexion. She is 5 feet 1 inch tall and her weight is around 50 kg.

Likely, she has a curly dark brown hair color with beautiful dark brown pair of eyes. She wears 6.5 (US) shoe sizes and her dress size is 4 (US).

The actress has a verified Instagram account where she has more than 1.7m followers. She has also shared her email id [email protected] for any business inquiries.