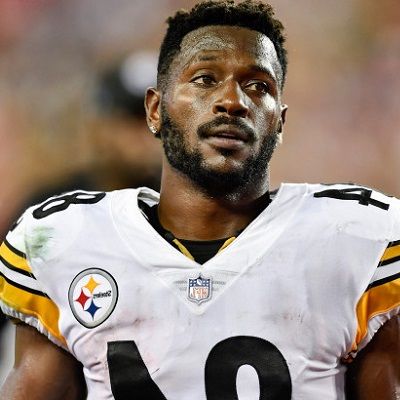 Blue is the color of peace. Water is blue. I like the color blue because it just puts me at peace. The patriotic symbol is blue. I just like blue.

No matter what you do in life, you want to make it boom. It can apply to anyone. Wherever you at, you always got to grow.

I got a strong spirit that I rely on and go into. It allows me to prepare and drive forward.

What is the relationship of Antonio Brown?

Antonio Brown is currently single. Even if he is dating anyone, he has kept his love life low key.

Previously, he was in a relationship with Chelsie Kyriss. His ex-girlfriend Chelsie is an Instagram Personality, Customer Service Representative, and former American teacher. Antonio met her for the first time in the year 2011 via a mutual friend.

Then they started dating and living together. Also, they had decided to get married at one point. Together they are parents of three kids: Autonomy, Ali, and Antonio Jr. Brown.

Unfortunately in 2019, they started having differences and had an on and off affair. And in December 2019, the couple’s feud was so nasty that they decided to break up.

After the split, they are not on good terms with each other but at times they come together for their kids.

Previously, he had an affair with Wiltrice Jackson and has a daughter Antanyiah Brown with her.

He is also the father of Apollo. Apollo’s mother’s identity is unknown.

Who is Antonio Brown?

Antonio Brown is an American football player wide receiver for the New England Patriots of the National Football League(NFL).

Brown became the first NFL player in history to compile over 1,000 returning and receiving yards in a single season in 2011.

Antonio got traded to the Oakland Raiders in 2019.

He was born on July 10, 1988, in Miami, Florida, USA. His birth name is Antonio Tavaris Brown Jr. and his age is 31. Brown’s father Eddie Brown, who played for the Albany/Indiana Firebirds, got voted the league’s greatest player ever.

He has a younger brother named Desmond Brown, who also is a professional footballer and plays for Pittsburgh Panthers.

Brown’s parents separated in the mid-1990s after his father started playing for Albany/Indiana Firebirds.

His mother Adrianne Moss remarried when he was 12 years old, and he got kicked out of the house at 16 as he didn’t get along well with his stepfather.

He holds an American nationality. He belongs to the Afro-American ethnicity.

Antonio Brown entered Miami Norland High School in Miami, Florida, ‘However, owing to his private problems, as his studies got hampered, Antonio lost admission to Florida State University and had to attend one year of preparatory classes at North Carolina Tech in 2006.

He got a scholarship to Florida International University in Miami after spending a season at North Carolina Tech. However, he got expelled for a dispute even before he could officially join the team.

Luckily, he got a call from an old acquaintance, Zach Azzanni, who offered him a place at the University of Central Michigan.

Antonio Brown left college without completing his senior year to enter the 2010 NFL Draft. He got selected by the Pittsburgh Steelers as their 2nd wide receiver pick and the 22nd overall wide receiver to be selected.

Similarly, he took part at Central Michigan’s Pro Day and tried to improve on his 10, 20, and 40-yard dash times after being unsatisfied with the numbers he clocked at the combine. He could improve his time in all three categories.

He played 16 games that season, Antonio made 69 receptions for 1,108 yards, two touchdown receptions, and three stars.

During the 2013 season as a starting wide receiver for the Pittsburgh Steelers along with Emmanuel Sanders, he broke the 1997 record by Yancey Thigpen for a single-season team record of 1,398 receiving yards.

Antonio also joined teammate Hines Ward to become the second Steeler to amass at least 100 receptions in a season.

Antonio’s successful performance earned him AFC Special Teams Player of the Week. In 2014, Brown led the NFL in receptions (129), receiving yards (1,698), and got tied for a second in touchdowns (13), all three were new team records.

Similarly, the Steelers made the playoffs and faced off against the Baltimore Ravens in the Wild Card Round.

Brown had a rough season in 2012 for which he got fined $10,000 for unsportsmanlike conduct in a match against the Washington Redskins. Antonio also sustained an ankle sprain and had to rest for three matches.

Similarly, in the 2014 season, he got fined $8,200 for accidentally kicking Cleveland Browns punter Spencer Lanning while attempting to hurdle.

He was second in career receptions and fifth in personal scoring yards for the Steelers by the end of the season while placing 57th and 78th in the all-time list of the NFL.

While in his sign school he won the 2005 Miami-Dade Gridiron Classic award of’ North Athlete of the Year.

Five times in his career, Antonio Brown got selected for Pro Bowl, with a fourth straight selection in 2016. For the third consecutive time of the year, he was named First-Team All-Pro.

Antonio has an estimated net worth of $30 million. Similarly, The Steelers paid him $17 million per year on average. It was enough to make him the highest-paid wide receiver in the history of the NFL until one year.

Later, when Odell Beckham Jr. signed a deal that paid him $19 million starting in 2018. His source of income is his playing career and sponsorship deals.

They accuse him of three incidents of sexual assault, in 2017 and 2018, against a woman who attended college with him.

He got accused of raping a woman who worked as his trainer, according to a federal lawsuit filed. The lawsuit got filed one day after Brown, became a Patriot player.

The first incident was when he exposed himself and kissed her without permission, the lawsuit says. In a time of that month, the lawsuit said, while they were streaming religious programming on a tablet at his South Florida home.

Antonio Brown has a height of 5 feet 10 inches and weighs about 82 kg.

Similarly, he has a black hair color with brown eyes. Also, he has a fit athletic body with a built muscular body.

Antonio is popular on social media.

What is the Net Worth of Antonio Brown? Update Inside