Anuel AA is a rapper, musician, composer. Anuel is engaged and is the father of his son, Pablo. 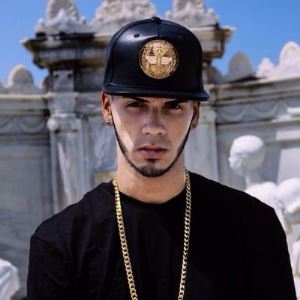 I told my manager, 'She's going to be my wife, I swear.

I am super excited, everything has been so special and we are having the best time.

Between our music and everything that we are going through with our love, everything is amazing.

Anuel AA is engaged to a Columbian singer Karol G. On April 25, 2019, the couple revealed their engagement. They are soon to get married but have not revealed their wedding details yet.

He met his girlfriend Karo for the first time on the set of the “Culpables” music video in August 2018. And then soon they started dating.

The couple is very open about their affair on the social media.

They are also messaging each other on social media like Twitter and Instagram saying, “The love of my life,” wrote Anuel AA, and Karol G responded, “I get tangled in your skin.”

They also have matching tattoos penning Carolina and Emmanuel on their hands.

Previously, he was married to Astrid Cuevas. The couple has a son Pablo Anuel born in November 1992 in Carolina.

His son is not allowed to visit him in prison but can talk on the phone. No further details about his wife and son are given.

The reason of his divorce is unknown.

Who is Anuel AA?

Anuel AA is known as the rapper and composer who also became the first pioneer of the Latin trap movement.

He is popular for song Sola, Que Seria, Ella Quiere Beber, and many more.

He is born to his parents Jose Gazmey( Father) known as vice president of Sony music and Nilda Santiago (Mother). He was born on 26 November 1992 in Carolina, Puerto Rico.

The birth name of his is Emmanuel Gazmey Santiago. His nationality is Puerto Rican and ethnicity is Afro-Puerto Rican. His birth sign is Sagittarius.

Going through his childhood, he attended a Catholic school in Carolina. Then, with the help of his father, he decided to become a rapper and took an interest in music in 2010. Also, he started recording a song with the Maybach Music group which was founded by Rick Ross.

On talking about his career, Anuel AA took an interest in music at the age of 18. He used to upload music to sound cloud before fame. Then, he released his first song Demonia with Nengo Flow. The various artist followed him.

Lately, he also became famous with his single hit Sola and also followed by famous artists like Daddy Yankee, Wisin, Farruko, and many more. He also released many songs like Bebe (2017), Supuestamente, Pasado y Presente, Unica” (Remix)(2018), and many more.

He also became the victim of a prisoner for gun possession charges on April 3, 2016. He was found with pistols including one stolen, and 152 bullets. But also, being in jail he keeps continued to release tracks.

He is known to be the greatest rapper. As his awards are not known but he lands at no. 1 Latin Albums with Debut Albums ‘Real Hasta La Muerte.

His net worth is $20 million as of 2021 according to the sources. There is no information about his salary.

There was a rumor that he was sentenced to 30 months in federal prison on the gun charge. And, there was the controversy that the track he released was widely criticized due to foul language and remarks about homosexuality and HIV patients.

Anuel AA has a height of 6 feet 1 inch and a weight of 69 kg. His hair color is black and his eye color is dark brown.