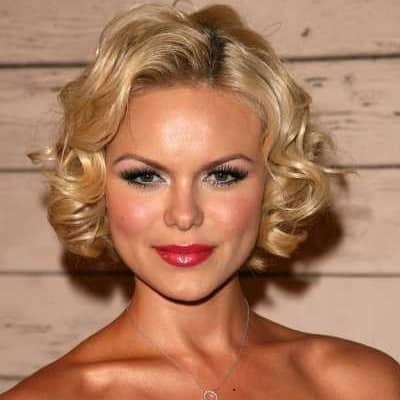 Anya Monzikova’s current relationship status is married. She is married to Josh Fritts on June 5, 2010. The couple has a son named August in 2014.

Apart from it, she doesn’t have any other affairs and relationships.

Anya Monzikova is a Russian-American model and actress. She is popular for her role as Rebekah in Iron Man 2.

Similarly, she is also a cohost of the television program Get Out!

Anya was born on August 25, 1984, in Vologda, Russian SFSR, Soviet Union. She moved to Florida when she was eight years old.

Living a year in the US, Anya was discovered by a local talent agent and began working as a young commercial actress and model. Working as a struggling actor, she landed a regular job as one of the Deals or No Deal beauties to pursue her career towards acting.

She holds American-Russian nationality and she belongs to English ethnicity.

As of now, she currently studying Wushu at the National Wushu Training Center. And she also and taking stunt, and sword classes.

Anya Monzikova started her career from NBC’s hit show Deal or No Deal holding case in 2006. Then her career flourished when she was voted 100 Most Beautiful People by People Magazine in the same year.

This landed her to appear on numerous magazine covers. Further, she had editorial fashions spreads in magazines such as Maxim, FHM, Stuff, Cosmopolitan, Vogue, Runway, and more.

The model has shot for lingerie campaigns for Dreamgirls and Fifi, shoe catalogs for Ellie Shoes, and the October 2006 issue of Maxim. Similarly, Anya had also appeared on the red carpet at The Daytime Emmys, Alma Awards, and as a presenter with Howie Mandel at the 2006 Emmys too.

Anya is also known for playing as Elena Romanov in the ABC Family show Melissa & Joey and as a prostitute in The Client List(2013). Then she started as a leader in a series called Aspen playing the role of January Beck, a Russian supermodel.

Talking about her recent works, she had a guest role playing as Irina Zemanova, in the 19th episode of S.W.A.T. episode Source.

Anya has amassed a net worth of around $2 million from her career. Other information regarding her salary is not known.

Her income source is from her acting an modeling career. Similarly, she also earns from different brand endorsements and from its promotions.

This model has managed a low profile life. And so she hasn’t appeared in any sort of rumors and controversy until now.

The actress has blonde colored hair with a beautiful pair of green eyes.