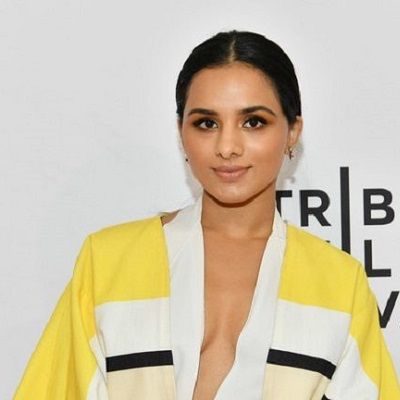 I can tell you my biology teacher loved biology. So, we didn't have that problem.

She has a good bond with her co-stars.

Similarly, she is an animal lover. On 19th December 2018, she shared a picture with a dog, Pablo. She explained about the torture, Pablo went through.

Who is Aparna Brielle?

Aparna Brielle is a professional American actress. She is well-known for playing the role of Sarika Sarkar on the NBC TV series A.P. Bio.

Aparna Parthasarathy was born on 5th February 1994 in Clackamas, Oregon, US. Her ethnicity is Asian.

She is the daughter of Partha Rajagopal (father) and Girija Parthasarathy (mother).

She has a younger brother, Vijay. Similarly, she was raised in the Cedar Mill area of Portland, Oregon, metropolitan area.

Aparna attended Valley Catholic School in Beaverton, Oregon. When she was nine years old, she was amongst the youngest Bharatanatyam dancers in the world to graduate in an Arangetram performance after a mere three years of training.

After that, she educated from the Arts & Communication High School in Oregon, United States.

She majored in marketing from the Linfield University in McMinnville, Oregon.

Aparna Brielle made her TV debut in 2014 on NBC’s supernatural drama Grimm. In the year 2015, she appeared in The Librarians and after that in Cooper Barrett’s Guide to Surviving Life.

In the year 2017, she landed on the role of Sarika Sarkar in the NBC comedy A.P. Bio.

She has also worked in web series which include Dead Girls Detective Agency. The first season started airing on 22nd October 2018.

On 15th October, Kevin Smith‘s Jay and Silent Bob Reboot released in which she played Jihad.

She is the winner of 2019 San Diego Film Awards for Best Actress in ism.

She has not been surrounded by any desperate rumors or scandals till now.

Aparna Brielle is a brown-eyed-brunette. She is 5 feet 5 inches tall and weighs around 54 kg.