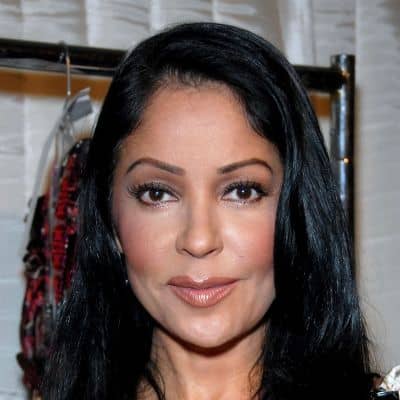 It was an amazing experience, a dream come true, to sing and act alongside Prince and become dear friends with all the members of The Revolution while filming 'Purple Rain.'

Everyone thinks that Prince and I had a beautiful, romantic love affair, but we didn't. We just let people think that in order to promote 'Purple Rain.'

My beautiful, selfless sister Manuela Testolini-Benet continues to inspire me to be a better woman. Always thinking of others, always doing God's work.

What is the relationship of Apollonia Kotero?

Talking about her love life, Apollonia Kotero is presently single and not dating anyone at the moment.

Previously, she was married to Kevin Bernhardt. Kevin is an actor, screenwriter, and producer. The couple tied the knot on 24 December 1987. However, they lived together for 10 years before divorcing in 1996.

Earlier, Apollonia tied the knot to her first husband named Kazja on 16 February 1980. He was a businessman. The couple stayed together for five years. Sadly, they ended their relationship in 1986.

Kotero has been rumored to dating late singer, Prince. However, both of them never confirmed their relationship in the public.

Apollonia Kotero is a well-recognized American actress, singer, model, and talent manager. Kotero is widely famed for co-starring in Prince’s 1984 film, Purple Rain, and for the lead singer of the girl group Apollonia 6.

Moreover, she has released a handful of solo and collaborative albums and many songs like Red Light Romeo, Mismatch, The Same Dream, and Since I fell For You.

Apollonia Kotero was born on 2 August 1959. At present, her age is 61 years old. Likewise, her birthplace is Santa Monica, California, the USA.

Romi is the daughter of her father, Victor Manuel whereas her mother is Maria Socorro Torres. Moreover, she has six siblings as well whose details are still behind the curtain. Her dad was a restaurant manager and her mom was a caregiver for the elderly.

Talking about her nationality, Kotero holds an American identity whereas her ethnicity is Mexican.

Regarding education, the star dropped out of school at 16 to pursue a career as a model.

Professionally, Apollonia started her acting career and television series after winning the Miss San Pedro beauty competition. She followed her win with another stint as a cheerleader for the Los Angeles Rams in the early 1980s. In the beginning, Kotero performed in CHiPs, Tales of the Gold Monkey, Fantasy Island, Matt Houston, and Knight Rider.

The star featured in the main role in the 1984 film, Purple Rain which was renamed Apollonia 6 for the film. She had originally recorded a version of the song, Manic Monday for the 1984 album Apollonia 6. Prince’s song, Take Me with U that starred Kotero and it outreached #25 on the Billboard Top 40 chart in the United States.

In 1988, Apollonia released her first solo album, Apollonia. It includes three singles and they are Since I Fell for You, The Same Dream, and Mismatch. Additionally, Kotero also featured in films like Ministry of Vengeance(1989), Back To Back (1990), Black Magic Woman(1991), and so on.

Further, Kotero also co-starred in Falcon Crest and hosted The Jazz Channel’s Latin Beat program. She then featured on E!’s Celebrity Homes, The Test, Rendezview, and MTV Cribs, and so on.

In 2009, the actress featured on The Twilight Singers cover of Prince’s “Why Doves Cry”.Tal

A talented singer, Apollonia has earned a handsome amount of money from her multiple profession.

It is reported that Apollonia Kotero has an estimated net worth of $4 million as of 2022.

Apollonia has never been part of any controversial matter or rumors till now. The star has been preoccupied with her professional and private life.

It seems that Kotero prefers enjoying her personal life and does not want to merge it with her professional life.

61 years old multi-talented star, Apollonia has gorgeous looks, an amazing shapes, and an admirable personality. She stands at a height of 5 feet 4 inches.

Furthermore, Kotero has brown eyes whereas her hair is black. Her body measurement is 35-24-35 inches(chest-waist-hip) respectively.

Regarding her social media presence, Apollonia Kotero is an active personality on social media. Apollonia has more than 155k followers on her official Instagram account @apollonia_kotero.

She is also active on Twitter with around 28k followers.

Moreover, Kotero is also available on Facebook with nearly 199k fans and supporters.