Apple Martin is a celebrity kid and a media personality.

Apple is still at her young age to be in a relationship. She is currently having her best life growing up.

The celebrity kid will surely be blessed with a beautiful relationship in her future days. 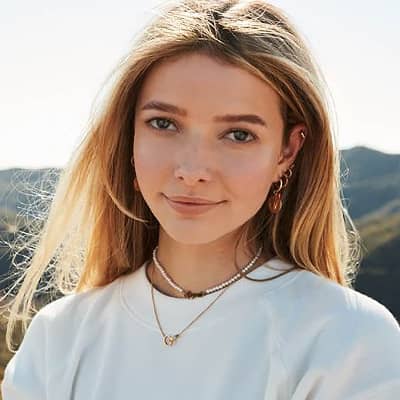 Who is Apple Martin?

Apple Martin is a celebrity kid and a media personality. She is popular for being the first child of  Gwyneth Paltrow and Chris Martin.

Moreover, she is also a talented person with the skills of acting and music inheriting from her parents.

Apple was born on the 14th of May 2004 in London, Britain. Her full name is Apple Blythe Alison Martin.

Apple mother Gwyneth Paltrow is an Academy and Golden Globe award-winning actress and writer. Likely, her father is a superstar singer Chris Martin. He is also the founder of the British rock band Coldplay.

Her parents get divorced in 2014 and it was finalized in 2016. And so Apple grew up mostly with her mother but yet have good relation with her father also.

Martin has her education from Harvard Westlake School, Los Angeles.

Apple grabbed the attention and limelight instantly after her birth being the celebrity child.

Likely in anticipation of Apple’s birth, her father Chris released a song titled I am your baby’s daddy under the name “The Nappies”. He came up again with another song, Speed of Song after her birth. It compiles all his experience and admiration at becoming a father.

Moreover, Apple is also an accomplished dancer. She also has the music skills from her father. Apple is a regular at-school choir performance and has impressive guitar skills and vocal abilities. She sang an Ariana Grande song for charity in 2016. As well as she has been seen performing with her dad at her school events.

On top of that, Apple is a big fan of her mother’s company, Goop. She regularly goes along with her mum to one of her stores. She is seen helping out behind the counter and telling customers about the products.

Apple hasn’t started her profession and doesn’t earn by herself currently. Being a celebrity kid she is living a luxurious life growing up.

Her mother Paltrow has a net worth of around $150 million. Likely, her father Chris’s net worth is about $130 million.

Paltrow regularly posts various photos and videos of Apple on Facebook. Once an image of Apple posted with her in March 2019 create controversial news and grabbed media attention.

Apple is a selective person went it comes to her images, Paltrow would always ask her for review and permission before posting any of her pictures. And this time, she didn’t ask her first believing that it wouldn’t matter as she was wearing a helmet and snow glasses.

Apple showed a displeasure reaction reminding her mum that she want allowed to post without her permission on social media. The comment goes controversial where some were seen supporting Apple whereas some her mum Paltrow.

With a fair complexion, she has beautiful blue eyes and blonde hair.

Apple doesn’t have any social media accounts as of now. Even so after, she is seen in various posts on her mother’s official Instagram account, “gwynethpaltrow”.