Archie Panjabi became famous as she appeared as Kalinda Sharma on The Good Wife. 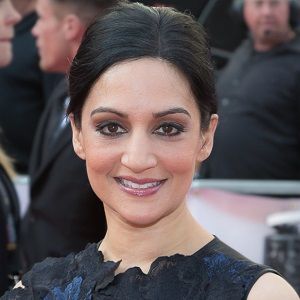 I love roles where I have to transform myself.

Archie Panjabi is a married woman. She tied the knot with Rajesh Nihalani in 1998. The couple has maintained their married life beautifully for two decades. It was an arranged marriage.

However, Archie and Rajesh have not welcomed any children to date.

Furthermore, she has a very cute black puppy named Mr. Q. She often shares the pictures with Mr. Q on her social media handle, Instagram.

Who is Archie Panjabi?

Archie Panjabi is an Award-winning actress from England. She became famous as she appeared as Kalinda Sharma on The Good Wife.

Furthermore, she has also featured in movies such as Yasmin, Bend It Like Beckham, and A Mighty Heart.

Archie was born on 31 May 1972, in Edgware, Middlesex, United Kingdom. She is of British nationality and has Indian origin with Sindhi ethnicity. Moreover, she is the daughter of Govind Panjabi and Padma Panjabi.

Concerning her childhood, Archie grew up along with her parents in England.

Talking about her education, she completed her graduation in management studies from the Brunel University in 1996. Furthermore, Indian beauty is also trained in ballet.

Archie began her career with the 1999 film East is East and the BBC television series Life on Mars. She made her debut in Hollywood in The Constant Gardener as a British diplomat in 2005.

Moreover, she came into the spotlight after appearing in the 2002 comedy Bend It Like Beckham. Additionally, she worked alongside Angelina Jolie in the 2007 movie A Mighty Heart in the role of former Wall Street Journal reporter.

In 2009, Archie collaborated with the CBS television series The Good Wife as Kalinda Sharma. Moreover, she has also appeared in the Fox comedy series Brooklyn Nine-Nine and NBC drama Blindspot.

Apart from that, she has also played in many TV shows such as My Family, Life on Mars, The Fall, Shetland, and much more.

The movie ‘Yasmin’ took her into the spotlight. Apart from her acting career, she is also active in various health programs and women’s rights stuff.

Archie has also taken part in The Heart Truth’s Red Dress Collection Fashion Show to expand awareness of the risk of heart disease.

So far, she won Primetime Emmy Award 2010-2012 for the Best Supporting Actress in A Drama Series for The Good Wife.

Furthermore, she has also lifted Chopard Trophy at Cannes Film Festival in 2007.

In 2013, she was nominated for a Golden Globe for Best Performance by an Actress in a Supporting Role in a Series, Mini-Series or TV Movie.

What is the Net Worth of Archie Panjabi?

Being a popular actress, Archie earns a handsome amount of money from her profession. Currently, she has a net worth of $3 million.

An average salary of an English actor is estimated to be $27300.

Once, Archie was dragged into The Goof Wife Green Screen controversy. At the end of the second season of ‘The Good Wife’, Kalinda (Archie) had slept with Alicia’s (Julianna Margulies) husband.

As the incident happened, it created a huge conflict between Archie and Julianna. Since then, the duo has barely worked with each other on the television.

Moving towards her body measurements, Archie Panjabi has a height of 5 ft 3 inches and weighs 59kg.

Moreover, she has beautiful black hair and brown eyes. Furthermore, her bra size is 34B, her waist 26 inches, and her hip size is 30 inches.