Are Ariana Madix and Tom Sandoval In An Open Relationship? Or Is It Just A Rumor? 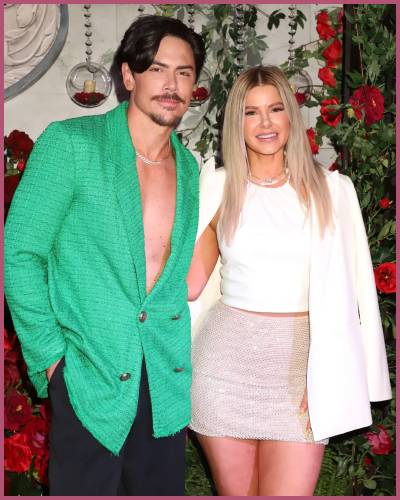 Just a few hours after the release of the brand-new Vanderpump Rules Season 10 trailer, Ariana Madix is addressing rumors that she and Tom Sandoval are having an “open relationship.”

In a clip, Scheana Shay tells Sandoval that ‘Katie (Maloney) said you and Ariana have an open relationship’ to which Tom replied, ‘Oh my God.’

Although there isn’t much more mentioned about the alleged “open relationship” in the trailer, Sandoval is shown hugging Raquel Leviss without a shirt on. Later, Raquel Leviss, who was spotted having sex with Tom Schwartz during Scheana and Brock Davies’ wedding, is seen grinning at Sandoval.

The trailer also shows Madix confiding in Lisa Vanderpump and saying, “This summer has been so f***ing horrific to me.” In the upcoming season, Lisa will serve as Ariana and Katie’s mentor and sounding board as they research potential locations for their sandwich store.

“We don’t have an open relationship. I’m really not that cool. Thought that was obvious”.

Moreover, the reality TV star also took time to respond to fans on Twitter, including Emerson Collins. Collins praised her for “cutting the nonsense off from the first second it’s heard”.

Furthermore, the star also replied “bisexual ≠ polyamorous” to a fan who asked if she was no longer bisexual.

How is the relationship between Ariana Madix and Tom Sandoval going on?

In 2014, following Tom’s separation from his former VPR co-star Kristen Doute, the reality stars started dating and are now going strong. The couple has been open about wanting to work on their relationship even if they haven’t yet taken the next step of getting married. Regarding marriage, in an interview with US Weekly in February 2020, Tom said:

“Whenever we’re busy, whenever we’re working out, healthy, being proactive, it just tends to be a positive influence on our relationship. We just want to kind of keep those things going on.”

“We’re very close. We joke around on a regular basis. We have great debates, intelligent debates. We have a lot of respect for each other. It’s a positive thing.”

In October 2021, while on ‘Watch What Happens Live With Andy Cohen‘, regarding their future marriage plans, Ariana said:

“I think, the big thing for me is that I’m not really into the whole fanfare of it. It’s really more about the two people, so if it was just about us, you know, I honestly think I would be more open to it”.

“I just don’t want it to be like a big thing about having a giant wedding and a bachelorette party and all that bulls–t.”

Even though the couple is living together, their wedding plans remain uncertain. In September 2022, rumors about their break up started circulating after Ariana wasn’t seen at Tom’s Los Angeles show. However, the rumors were false and the couple is still going strong.

You may also like to read: Is Ariana Madix ready to have children – freezing her eggs?