Are David Spade and Naya Rivera in a relationship? Continue reading to know more!!!

Updated On November 14, 2022 | Published By: Lisa Arnold | In Child , Dating , Relationship
Share this 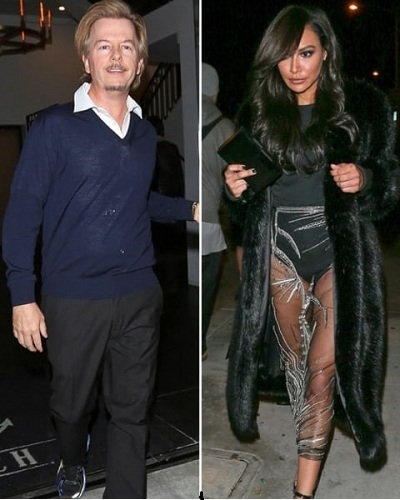 Update: David Spade and Naya Rivera split in November 2017 after a few months of dating.

Where did they meet?

E! News reported the two have been trying to keep their relationship out of the public eye. A source told E! News that Rivera and Spade have been seeing each other for a couple of weeks. After seeing both in Catch restaurant in Los Angeles, it is said that they are very cozy and spotted anywhere together.

The beginning phase of their relationship

A source told Entertainment Tonight that the relationship,

“is very casual and they had a fun time together. Naya was in Hawaii with a friend and met up with David. They have known each other for a little bit through friends.”

And eyewitnesses, who saw the couple packing on the PDA, said they appeared to be completely smitten with each other. They seem more comfortable and cozy nowadays. Similarly, they are also spotted in different places by the media. They had already reached another level from their friends. She said:

“I have always kept a flame for him. In between boyfriends or whatever, if I was single for a minute, I would always answer his emails and go see him. He was just kind of always the One.”

Their Romance in the pool

American actress Naya Rivera and comedian David Spade were spotted in the pool of Halekulani. They were getting very intimate inside the pool. It was their romantic pool date. They shared a kiss but kept it discreet, giggling and hugging occasionally.

Rivera shared some solo pictures on Instagram in a sexy bikini. The source continued:

“The pair went for a short swim, hugged and had lots of body contact in the pool. They kept to one side of the pool where there was the most covering from prying eyes. Outside of the pool, they sat on lounge chairs and talked animatedly. They spent about an hour poolside together.”

“They were very happy, they looked pretty comfortable together.”

You may like to read Naya Rivera and David Spade Dating?? Or Is it just a prank for April Fool?!… Look at her hilarious Reaction to the News by Naya on their relationship!!!

Rivera was married to Raya Reynolds and they divorced after two years of their marriage they also had a son named Josey. She filed for divorce last week and her lawyer has said she is asking for primary custody of their one-year-old son Josey with visitation rights for Ryan, according to TMZ.

They separated in 2016. The couple released a statement on Monday shortly after news broke of their split,

“After much consideration, we have made the decision to end our marriage. Our priority is and always will be our beautiful son that we share together. We will continue to be great co-parenting partners for him. We ask for respect and privacy for our family during this difficult time.”

The couple has split; this was confirmed by David Spade in August 2017 and he was seen dating a mystery woman after the breakup.

California-born Naya Rivera was born as Naya Marie Rivera on January 12, 1987.  Multi-talented Naya is an American TV/Film actress and also a singer. Additionally, she is also a stage/theater actress. Back in 2013, she releases her debut single, “Sorry” featuring Big Sean. She is popular for her ‘naturally pouty lips’.

Presently, she is a prominent figure in the media starring in Fox’s musical comedy-drama television series, “Glee”. She portrayed the role of Santana Lopez from 2009 to 2015. More bio…

David Wayne Spade is an American actor, stand-up comedian, writer, and television personality.  Spade is known for a comedic style, in both his stand-up material and acting roles, that relies heavily on sarcasm and self-deprecation.

The Rocky and Rambo series Superstar Sylvester Stallone had a Successful career run, But what about his Relationship?
Tags : Actor Comedian